This week we examined Puritan society in New England during the 17th century. We will not examine much else in regard to North American colonization, but I feel that a focus on the Puritans is appropriate.  Of all the early colonization efforts, theirs had the most influence on the formation of what America would become, for better or worse.

We first looked at what motivated North American colonization in the first place.  Sometimes we tend to think that such colonization must have resulted from great oppression of the lower classes.  In reality many in England who came to North America had some limitations on their lives under Charles I, but all could live out their daily existence without much change, and most of them came from the middle-classes.  After all, a journey across the Atlantic did cost money, and the poor did not have much of it.

The basic characteristics of most who came probably consisted of. . . 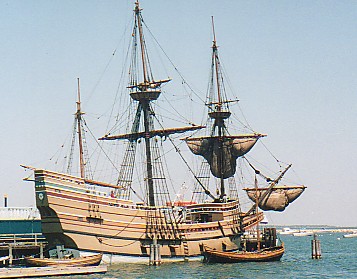 All these categories fit the Puritans, and then some.

We have some unfair misconceptions of the Puritans.  They were not, “Puritanical” in their morals.  At Harvard College, which they founded, a mug of beer came with the “meal plan” for lunch. . . and breakfast.  A surprising number of sermons (which were lengthy) dealt with sexuality.  In one town a married woman complained to the Church elders that her husband was not, shall we say, performing his husbandly duties in the bedroom.  The husband got put in the stockade for a day, with a sign around his neck indicating the reason for his being there.

But the Puritans were deadly serious about their mission, and about life in general.  They wanted to leave England not so much because they were sorely oppressed, but because England would let them fully live out how they perceived God’s call on their lives.  The Puritans did not want merely to tweak society, but remake it from top to bottom along more Biblical lines.  England simply offered no room for this, and so, like Constantine (Constantinople) and Ikhneton (Amarna) before them, they sought a fresh canvas to live out their vision.

They did not do this blindly.  After all, God had already called a people to flee a wicked land, and led them to a new place where He gave them special laws to live as a witness to the nations.  The Puritans modeled themselves on Israel, which perhaps explains the vast increase in Old Testament names like Jacob, Joseph, Sarah, etc. in Puritan communities.*  Some went so far as to give their children hortatory names, with actual examples like. . .

And the very unfortunate young lady who was named

The light that they hoped would shine could not be dimmed in any way.  While they came to have the freedom to exercise their faith, they could not afford to have “error” contaminate them.  Within their communities they granted no freedom of religion to others, and came into conflict most frequently with Quakers.

This strong sense of mission made a huge impact on Puritan communities.  When compared with other places in Europe or North America, the Puritans had a much lower illegitimate birthrate, and a much higher literacy rate.  Man for man the Puritans gave more sacrificially than their contemporaries.  Nowhere else was their more attention to Scripture, more “clean and sober” living.

As with any zealous people, however, this sense of mission had a darker side.  Since their entire society had a spiritual overtone, all that happened could be explained in spiritual terms.  If you went sailing on the Sabbath (forbidden in Puritan communities) and drowned, well, that was what you get for breaking God’s law.  If you had a toothache, no doubt you had sinned with your teeth.  The Puritans frowned on taverns, not because of alcohol, but because it tended to lead to boisterous singing.  All that energy was better spent elsewhere.  The Puritans wanted no blending, no syncretism with what they considered “pagan.”  The Puritans did not celebrate Christmas, which ’12 Days’ has its roots in the Roman festival of Saturnalia, and fined those that did celebrate it.

We can trace this approach back to the Puritans attitude about life in general.  Typical was this quote from Puritan Richard Sibbes,

And from another fellow Puritan,

God hath placed us in the world to do him some work.  This is God’s working place; He hath houses of work for us: now, our lot here is to do work, to be in some calling. . . to work for God.

While the Puritans had many strengths, many of their weaknesses made themselves manifest in the infamous Salem Witch Trials.  When approaching this event, we should keep a couple of things in mind. 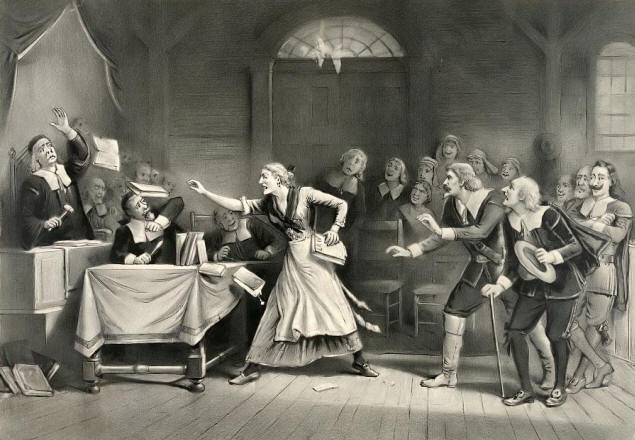 In 1692, Salem experienced a burst of hysteria and a flurry of accusations over witchcraft.  They did not dispense with people on mere whims.  They had trials, brought forward witnesses, and had standard of evidence.  Those convicted usually had several witnesses against them, and many claimed to see spectres of the accused out and about in the community.  Astral Projection is a claimed power of witches.

If convicted, you had a chance to repent and be spared death.  However, one problem with the trials was the court’s demand that to demonstrate repentance, the accused name other witches in the community.  Refusal to name others could be taken as a sign that you had not really repented after all.

Within a few months they put the brakes on this runaway train, mainly because 1) They recognized that the trials tore the community apart, and this could not be the work of God, and 2) Significantly, they did not discount “spectral evidence,” or claim that the witnesses lied, but rather, that spectral evidence could be faked by demonic powers, again revealing their worldview.  They believed in evidence, but their standard for evidence, for better or worse, differs a good deal from ours today.

Though the trials stopped, they revealed deep divisions within Salem itself and a sign of the failing of the Puritan dream of a unified, godly community.  As the map below indicates, most of the accusers (‘A’) came from the poorer western sections of town, and most of those accused came from the wealthier eastern section. 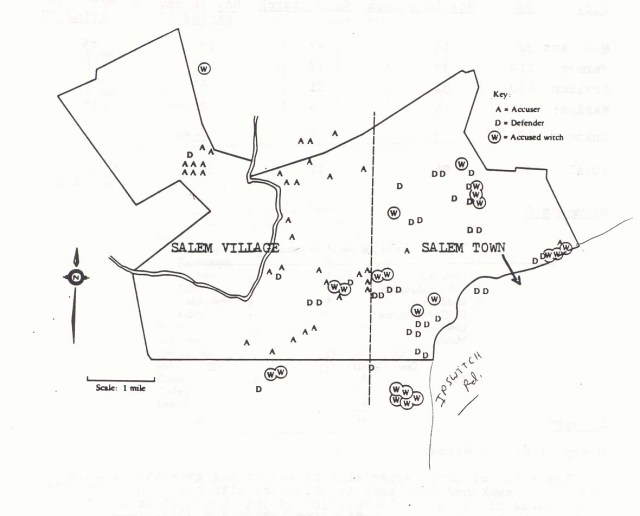 The Puritans would fade away in the 18th century, but their stamp upon America remains, especially in regard to “family values,” and education.  In the early colonial era, New England could be described as perhaps the most “conservative” area, and is now one of the most liberal.  Some see this as evidence that, being wound so tight, New Englanders simply “snapped” and went the other way.  Some trace this to the influx of immigrants in the mid 19th century and beyond.  Personally, I tend to see more continuity.  In the 19th century, New England formed the hotbed of the abolitionist movement, and I think the Puritan, crusading spirit lives on, for better or worse, in New England today.

*One can see cultural differences reflected in how those in colonial Virginia, for example, named their children, with a predominance of famous English kings (William, Henry, etc.) and classic English female names like Margaret.  Clearly, Virginia had a more traditional Anglo-centric emphasis to their society.