When we attempt to define civilization we might be tempted to think of things like refinement and gentility, but this is not quite right.  As Kenneth Clark stated, “such things may be the agreeable results of civilization, but they are not what makes a civilization.”  In fact, believing that “refinement” will heighten your civilization may lead to barbarism.

In the modern age perhaps the ultimate example of refinement goes to Louis XIV Versailles.  I can think of no other place dedicated to symmetry, luxury, and delicacy.  Yet at root Versailles existed due to heavy taxation and in some ways, exploitation.  With its maze of manners and ridiculous customs, one could argue that Versailles exploited even those who lived there and “enjoyed” its opulence.  I can’t imagine any sane person wanting to go back in time to take part in the massive charade.  To me Versailles has little real beauty, and suffers from an excess of refinement.  I think the links between Versailles and the terror and barbarism of the French Revolution can be overstated, but surely, some connection exists.

In The Birds by the great Greek playwright Aristophanes, a character named Meton says that,

With the straight ruler I set to work to inscribe a square within a circle; in this center will be the marketplace, into which all straight streets will lead, converging into the center like a star, which . . . sends forth its rays in a straight line on all sides.

It sounds heroic, clean, and noble,  but then we remember that Aristophanes wrote comedies, and Meton is a figure of fun, a puffed-up fool.

Their democracy under Pericles (ca. 450 B.C.) had its roots in the reforms of Solon (590-570 B.C.).  Certain privileges still resided in the upper classes after Solon’s time in power, but clearly Solon broadened the political class and narrowed the social gap between rich and poor.  Among his reforms. . .

The lock-step nature of Athenian society under Draco received a welcome outside stimulus.  Athenians started trusting one another, and their economy grew.  Plutarch writes that, “In Solon’s time, no trade was despised.”  The exalted Agora in fact served as a market and a general festival area.  Different people mixed together from different trades and classes.

Though no one believes that this sculpture of Solon was done anywhere near his lifetime, it reveals something of the common wisdom and concern that seems out of place with his upper-class roots:

If we go forward in time another 100+ years, we come to this bust of the Athenian statesmen Pericles. 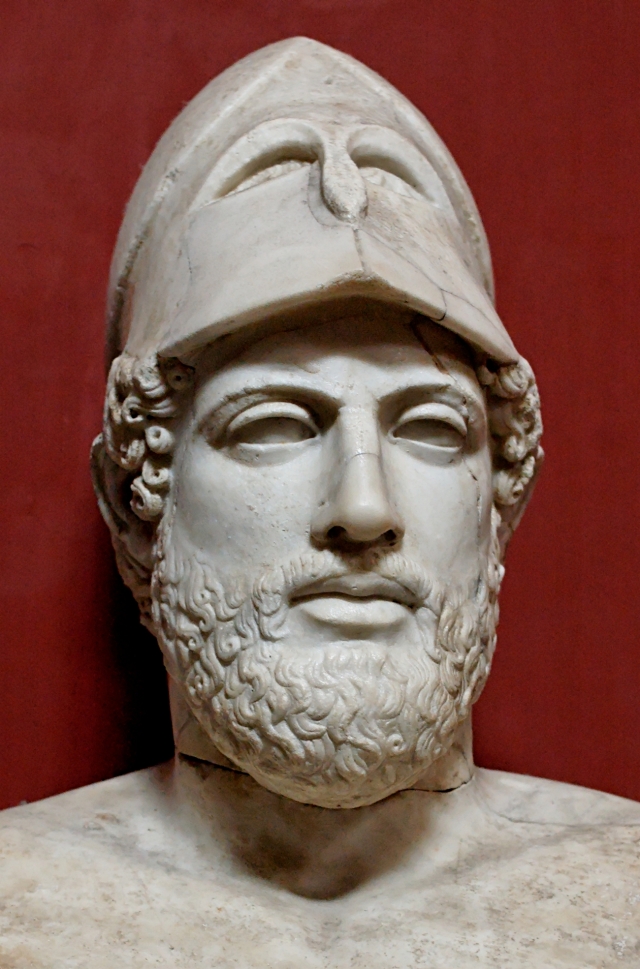 Pericles had many successes and we can admire much of his statesmanship, but his face betrays him.  We do not see what we see in Solon.  With Pericles we have the smugness, arrogance, and touch of detachment for which the Athenians became notorious by 431 B.C.  If Pericles gets his share of credit for the brilliant culture of 5th century Athens, he shares in the blame of how far they had slipped since Solon’s time.   For example, under Pericles one could not marry foreigners, and foreigners in general had no hope of participating in Athenian political life.

Like Meton, the Athenians came to crave elegant simplicity and clarity.  They obsessed over the ideal.  The brilliant pythagoreans, who believed that all of life could be reduced to simple ratio, actually killed a member of their school who divulged the existence of irrational numbers.  They murdered to stay detached from reality.  Nothing should be allowed to end their beautiful dream.

This attitude bore bad fruit in more general ways.  Athenians still benefitted greatly from foreign trade.  In fact they depended on it, and Pericles’ initial strategy for the Peloponnesian war put absolute reliance on the availability of foreign goods.  But the tradesman and the merchant now had no social standing, whatever their political rights might have been.  The aristocratic ideal of refinement and detachment had taken firm root among the Athenian elite.  If we take Aristophanes as a reliable source, in Pericles’ day the upper-classes avoided the Agora and hung out by the gymnasium with their own more leisured companions.  Athens’ contempt for the artisan and merchant destroyed them.  Trade depends on good relationships and good faith, the same qualities needed to hold together their empire.  If Athens neglected their tradesman they would soon neglect their empire, and treat them as second class citizens.

As Lewis Mumford notes in his excellent The City in History, they did just that.  Their platonic sense of detachment led to Athens exploiting its tributary states, once allies.  This detachment and exploitation reached its peak in the Parthenon (funded by money taken under false pretense from their allies)  which doubles as an insanely impressive technical achievement and a hymn to self-worship unequaled except by the pyramids and Nebuchadnezzar’s statue.

A “schism in the soul” of Athens had arrived, an imbalance that gave the life of the leisured mind precedence over the life of the laborer.  Whereas before Solon gave economic incentive towards developing a trade, now tradesmen sat on the outside looking in.  Plato later took the aristocratic idea to its fullest extent and enshrined philosophers as kings, strictly dividing the people based on their innate functionality.  None could accuse Plato of loving democracy, but ironically, he is in many ways Pericles’ heir.

When looking at the Civil War modern history textbooks do a great deal of damage by glossing over the virtues of the South.  Many in the North had no love for blacks, and the industrial system exploited people in ways not terribly different than slavery.  Some southerners treated their slaves well (relatively speaking), some in the south spoke against slavery, etc., etc.  The ante-bellum South was no monolith.

But in the end even the Southern romantic must see that large aspects of the refinement and gentility that the South possessed came from their aristocratic detachment, made possible by wholesale exploitation of blacks.  Will Durant wrote that all cultural achievements have roots somewhere in exploitation of some kind.  I disagree.  But some cultural achievements do have rotten roots.  Some of what makes the ante-bellum south appealing (i.e. the “Gone With the Wind” culture)  had its roots in arrogance, but also in aristocratic detachment from the “vulgar’ aspects of life.  Let others get their hands dirty.  One southern newspaper wrote just before the war,

Free society!  We sicken at the name.  What is it but a conglomeration of greasy mechanics, filthy operatives, and moon struck theorists?  They are hardly fit for association with any Southern gentlemen’s body servant.

Those “hardly fit” would soon bring judgment upon Southern society, much as all the merchants, farmers, and craftsmen scattered across the Aegean dealt a mortal blow to Athens by the end of the Peloponnesian War in 404 B.C.