Every good teacher will seek different ways to communicate effectively, and over the years much has been written about how teachers can adapt to the different learning styles of the students.  Much of this information should be used as best we can but in the end, I think too much is made of it.  After all, it is impossible for teachers to adjust individually to each of his/her students, and much easier for students to adjust to the teacher.

So much of how one teaches comes from who one is as a person.  Teachers must be “on display” for much of the day, and so perhaps more than most professions, the strengths and weaknesses of teachers as people reveal themselves in the classroom.  Since this cannot be avoided, it might as well be embraced.  We have to play to our strengths and let the chips fall.  This is inevitable and in one sense, appropriate.  We are finite, limited, and are most effective when in a community of other teachers with different strengths.  This way, in the end, it all balances out.  Teachers can be blamed for a variety of things, but not our certain failure to be all things to all students.

One of my favorite sections of Toynbee’s A Study of History comes in volume four when he examines the subtle idolatries that infect civilizations — idolatries of the past, of institutions, or techniques.  Toynbee applies this latter lens to the Roman army from its disaster at Cannae in 216 B.C. to its decimation at Adrianople in 378 A.D.

After Cannae Scipio helped bring about several reforms in the Roman infantry, making it more flexible and mobile.  But it was Hannibal’s cavalry that had really done Rome in at Cannae, and Rome’s reforms in this area were not nearly as significant.

Fast forward 150 years and Crassus leads his army into Parthia.  Once again, the Romans lose decisively, and once again, the cause is the Parthians heavy cavalry deployed in a wide open area. 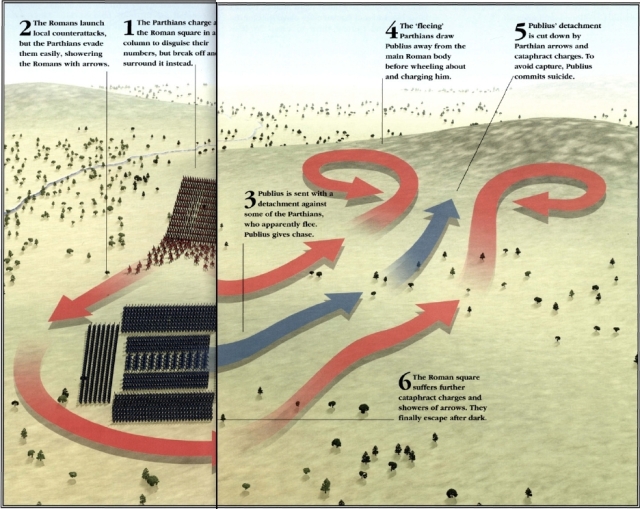 Historian William Tarn commented that, “Carrhae ought to have revolutionized the world’s warfare,” but Rome ignored the evidence, or perhaps has no possibility of changing anything at the time.  The Republic was collapsing all around them, and Caesar fought illegally in Gaul more or less simultaneously.  In any case, Surena, the victor at Carrhae, was executed shortly after the battle and his magnificent cavalry broken up.

By 378 A.D. the empire totters on the verge of collapse, and the Goths deal a decisive defeat to Rome at Adrianople, with cavalry again the mainspring of this final disaster.

Toynbee argues that Rome idolized its infantry technique to the point where they never could adapt their cavalry, and this failure, among many others, helped end their empire.

One of Toynbee’s great strength is his search for spiritual roots to what seem like physical problems.  Rarely do I disagree with how he applies this methodology, but I think I may in this instance.

The adaptations made by Scipio allowed Rome to conquer much of the Mediterranean within two generations, so their attachment to the technique/institution seems understandable, and if they “idolized” it that might be expected.  This picture could fit Toynbee’s theory, but perhaps they didn’t “idolize” the technique, perhaps they simply had a finite army, just like every other civilization.  Rome could never be all things to all men, and neither could their army.

Even during their declining “Empire” phase Rome continued to adapt their military, using auxiliaries from different provinces to fight alongside the standard infantry.  So we cannot say that Rome had frozen itself in time from Scipio onwards.  Their cavalry improved enough to help defeat Hannibal at Zama, and Caesar’s cavalry helped him defeat the Gauls — no small achievement.

Maybe we can say that Rome was a great teacher, and could reach many different students, but would always have a problem with students of certain type.  To be limited is not the same as being idolatrous.  To ask them to act differently is to ask them not to be Rome.

And, we have to admit, Rome had a very successful military for whatever shortcomings they possessed.

The issue Toynbee raises, however, still has value.  Why did Rome improve in many ways at many levels, yet never develop an ‘A’ level cavalry?

I would curious for any other thoughts on this question.