I am republishing this post as a companion piece to the review of Michael Psellus’ Fourteen Byzantine Rulers. The original post begins below . . .

Proximate causes to events are always easier to see, and depending on one’s role in the sweep of history, more satisfying to the ego.  The rise of Nazism in Germany horrified the civilized world of Europe. “Sore losers after W.W. I,” many no doubt thought. But the Nazi’s drew strength in part from the centuries old feeling that they (Germany) were no longer going to be the doormat of Europe.  After all, from the time of the 30 Years War (1618-1648) most of Europe’s conflicts played themselves out on German soil.  England, France, and Russia had a part in creating the monster that nearly destroyed them. The Jews of Jesus’ day faced a variety of problems, and the Romans could hypothetically be blamed for nearly all of them.  “It’s their fault that we have no nation, freedom, etc. etc.”  But Jesus never let His fellow Jews sink to this attitude.  His famous words in Matthew 15:11,

applied directly to the spiritual leaders of the time, but have broader application.  Speaking as one of God’s prophets, he speaks as the prophets do.  “Your problems are your own faults.  Don’t project blame elsewhere.” In the fourth volume of his A Study of History Toynbee applies this principle in a fascinating way regarding the Byzantine Empire. A look at Byzantium’s history that hit only the highlights would likely make a long jump from Justinian over to the Crusades, which would give the impression of an embattled area of Christendom making a desperate stand against the rise of Islam.  The political and military failure of the Crusades (to say nothing of the moral failures on all sides) end up sealing their fate, and the Moslems finish them off in 1453 when Constantinople falls.  Thus, they could easily say that the fell due to Islamic aggression.  It’s “their” fault. But this perspective ignores what happened in the intermittent period between these bookmark events, and especially ignores the Byzantine’s war with Bulgaria from A.D. 977-1018, which took place long before the Seljuk Turks posed any real threat to the Byzantines (those who read the review of “Fourteen Byzantine Rulers will note that this was during the reign of Basil II). A look at the map just before the conflict reveals the situation, with the Byzantines in Pink and Bulgaria in green. 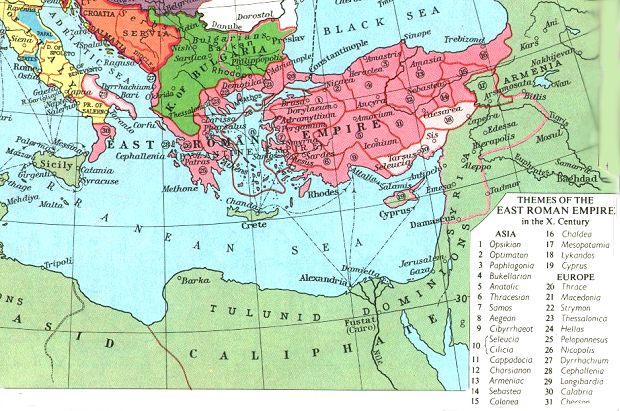 In fairness to the Byzantines, the Kingdom of Bulgaria represented a political division from the old Roman empire, and since the Byzantines had always seen themselves as “Roman,” they likely felt the duty of reclaiming lost territory.  It also appears that the Bulgarians may have initiated conflict in 700’s-800’s A.D., and perhaps the Byzantines this time thought of payback. But this political division ran only skin deep.  Both kingdoms had unity on a deeper level, as both committed themselves to Christianity, but more specifically, to the distinctive “Eastern Orthodox” brand of Christianity prevalent in Eastern Europe at the time.  Whatever the Byzantines might gain from such a conflict, an inevitable cost on the “back end” would wait them for them as in all civil wars.  If they could forego the political division, they would still likely have had unity against a common foe. Still, as a result of the war, the map changed and their territory increased. . . 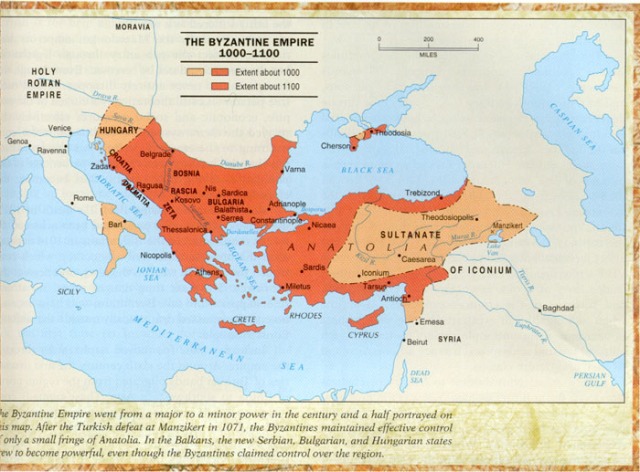 The map also shows, however, that their gains in a long, desperate conflict between evenly matched foes came in part by ignoring the growing threat to the east.  By gaining in the west they ignored Anatolia and the growing power of an enemy with whom their differences were more fundamental. The map doesn’t show the social strain placed on Byzantium as a result of the war.  Emperor Basil the Bulgar Killer gained glory in war, but ignored the growing strife of his subjects in agricultural areas of Anatolia, a product of what  Toynbee calls, “their profound political distress and economic discontent, too frequent to be dismissed as the work of ambitious or unruly individuals.”  What should have been the core of Byzantium’s strength was in fact rotten with decay, ready to fall away at a mere touch to the Turks. Though their territory had increased since the 700’s, their burden of defense had increased, and not just in terms of territory.  They also had to care for more people, and thus had even reason to distract themselves from the social problems in Anatolia. The maps tell the rest of the story. . . 1025 A.D.

1355 A.D.: Bulgaria is back, showing that their previous conquest could not hold amidst growing internal social strife.  All of that effort did nothing for them in the long run.

And then, the end of it all, proving Matthew 15:11 true, though it took centuries for it to apply in the Byzantine case.