In the later 19th century Victorian England ruled the waves, the economy, and much of the inhabited world.  At the same time, Victorian morality and dress focused on maintaining distance, withdrawal, and possibly, even disdain.  It is perhaps no surprise then, that many Victorians saw themselves as the incarnation of classical Athens.  Classical Athens ruled the waves 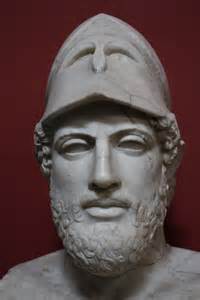 and the treasuries of many a Greek-city state.  They also began to develop at that time a philosophy that would later bloom into varieties of gnostic detachment, and the great Athenian Pericles has the arrogant disdain that comes with such detachment down pat.

Those that saw themselves in his image would likely follow in his footsteps. And indeed they did.  In his Decline and Fall of the Roman Empire Gibbon poured his own brand of disdain upon Byzantine civilization, perhaps even coining the pejorative term “byzantine,” i.e. confusing, outdated, etc.  He paid no attention to Eastern civilization, and if he did he would not have understood it.  The English intelligensia (who led scholarship as they led the world at that time) got brought up, perhaps in Gibbon’s day, and certainly after that, to adopt the same attitudes towards this “unwieldy” appendage of the Roman Empire. Thankfully in the 20th century some great English historians (Toynbee among them) rebelled against this trend and examined Byzantine history afresh, and this resulted in

English translations of the many primary sources from that period.

I admit that I failed in my previous attempts to read Procopius, but immediately recognized the merit of Michael Psellus’ Fourteen Byzantine Rulers.  He writes with an easy style and great psychological insight.  He lets us know when he personally witnessed something or knew someone, and when he reports 2nd or 3rd hand.  His writing adds to the mountain of evidence that, contra Gibbon, Byzantium attained a high level of civilization and its own unique style apart from Rome.  It was far more than a decrepit appendage of the western Roman empire. Psellus writes in a disarming and clear style.  He structures his narratives well and doesn’t shy away from playing armchair psychologist when appropriate.  I always appreciate when historians seek to interpret rather than just report, and so its natural that I would appreciate Psellus’ work. The introduction to the work argues that Psellus writes about decline, and there is some truth to this.  Psellus doesn’t see a clear linear progression downwards from the first to last ruler he discusses.  Nor does he lock in to one particular trait that makes a ruler good or bad.  But he does have a keen sense of cause and effect over the long-term, and this gives his narrative a dramatic sweep to go along with the vivid people he portrays.

As much as I enjoyed the work, I think both Psellus and the introduction to his text might misunderstand the roots of Byzantine decline. The first ruler Psellus discusses is the great Emperor Basil II.  After a rocky start, Basil righted the ship of state by transforming himself.  Psellus writes of a man who refused to indulge himself in the pleasures and distractions of palace life.  He ate simply, dressed simply, spent little money, and devoted himself to duty.  Basil did have a weakness, however, that for power itself.  Though he had various counselors and a Senate at his disposal he made them useless by his firm will and desire to see things done “right” by himself. This could work as long as the one wielding such absolute power had a firm dedication to duty and possessed more wisdom than those around him.  Naturally, those that followed him had neither the character or the longevity of rule to have the kind of impact and success of Basil II.

But the decline came not after Basil in my view.  Rather, the decline came in Basil’s time for two main reasons. The first has to do with the war he initiated with the Bulgarians.  I don’t think the war had any real solid justification (Psellus agrees, stating that Basil “deliberately attacked their country”) and distracted them from their real problems with the Moslems on their eastern border. I touched on this war and its consequences in this post from several months ago, so I won’t elaborate here.  What I didn’t say in that post is that, based on Basil’s incessant energy and love of power, it seems like the kind of war someone like him might engage in.  I detailed the effects of this war on the Byzantine’s in this post here, which I also reposted. The second reason is that the system Basil set up that concentrated power in his hands put too many eggs in one basket, that of the emperor.  This “idolization of an ephemeral institution,” that of the old Roman empire, may have contributed significantly to their decline.  This gets placed at Basil II feet.  His failure to share power extended to his brother and probable heir, whose indolence and laissez-faire attitude towards governance suited Basil II perfectly.

Sure enough, when his brother came into power he continued this same approach to life.  A country can do alright if such a person delegates well to wise people, but Constantine VIII followed in his brother’s footsteps and cared nothing for the Senate, yet accompanied that habit with far less wisdom and vigor than Basil. This pattern of concentration of power and abuse of power had varying degrees of consequences over time.   Romanus III (1028-1034) thought only in terms of “bigger is better.”  To fight he raised big armies.  To increase the treasury he collected “big taxes.”  When he repented somewhat of his former ways, he sought to build the biggest church he could to demonstrate his sincerity.  While I wouldn’t trace these acts directly to Basil, it shows the same lack of proportion and balance that Basil II displayed regarding power.  Psellus praises devotion and piety in general, but then writes regarding Romanus,

It cannot be right, in order to show one’s piety, to commit great injustices, to put the whole state into confusion, to break down the whole body politic.  He who rejects the harlot’s offering, who utterly despises the sacrifice of the ungodly, as though the wicked were no better than a dog — how could he in any way draw near a building, however rich and glorious, when that building was the cause of many evils?*

Byzantium would remain “off kilter” for the rest of its existence, but again, their problems only make sense in the context of their great achievements.  If they had nothing to lose, they had nothing to mourn in their decline.  But for Psellus and us, this is not so.

*This passage should not be read in isolation, as it could lead one to think that he gave lip service to “general piety” as a cloak for a secular world view.  One only needs to read his praise of Emperor Michael IV (1034-41), who abandoned the throne to join a monastery at the end of his life, to see the error of that line of reasoning.  Among Michael’s other acts was the founding of a home for reformed prostitutes.  In order to help lure them out of their way of life and end their fear of poverty, Michael made the home luxurious, promising any who came and vowed to live celibately that “all things, unsown, without labor of hands, would spring forth for their use” (Homer, The Odyssesy).  Psellus claims that “swarms” of women came to the homes.