This week we looked at the death of Cyrus and the reign of his son and successor, Cambyses II.

When examining Cambyses, we must use some caution.  Much of the information (though not all) about what we know about Cambyses comes from Herodotus’ writing, but Herodotus got much of his information from Egypt.  Cambyses had conquered Egypt, and we can assume that the information the Egyptians gave Cambyses would be slanted against him.  It appears that Cambyses had a terrible temper, exhibited erratic behavior, and may have killed both his brother and sister.  What are we to make of this dilemma?

Under such circumstances, a fiery crash of some kind would be quite likely.

We can speculate as armchair psychologists that Cyrus, given his tremendous energy and success at spreading the power of the Medo-Persians, would not have been home much.  We might surmise some latent guilt over this, and this means that if Cambyses ever came to him and said, “My tutor did ‘x’ and I didn’t like it, do something,” Cyrus might feel compelled to take his side and defer to Cambyses instead of his teachers.  And, if he was raised always to be deferred to, if he was always told how wonderful he was, he would never blame himself for his bad driving.  It would have to be the pit crew’s fault, the car’s fault, the designer’s fault — anyone or anything but himself.  This frustration would lead to anger, and erratic behavior might result.  It is noteworthy that Cambyses’ successor Darius I, a much better king than Cambyes, came from outside Cyrus’ family and was more “self-made” than Cambyses.

However, Herodotus also records several incidents of Cambyses going out of his way to desecrate Egyptian religious sites and customs after his conquest of Egypt, and this seems less plausible to me..  Cambyses, for example, is supposed to have exhumed a dead Pharaoh’s tomb and abused his corpse, and personally killed the “Apis Bull,” sacred to Egyptians.  These actions would have involved such a dramatic departure from Persian practice under Cyrus, that I wonder about their authenticity. 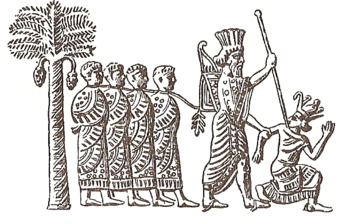 We discussed this dilemma in class.  I tend to think that if one source is all we have to go, we should accept that source unless someone else can contradict it.  Unless Herodotus can be shown generally untrustworthy (and I believe him to be generally trustworthy) than we should not discount his evidence without other evidence.  We should not indict him on mere suspicion.  His actions in Egypt seem very uncharacteristic, but again, we have other evidence in Persian art of the period as well (see above image).  Perhaps Cambyses was just as bad a Herodotus and the Egyptians claimed.