In his Journal of a Soul, the great Pope John XXIII admonished himself, “Not to worry if others are in a hurry.  He who is always in a hurry, even in the business of the Church, never gets very far.”

If this is a principle of Christian spirituality, it should be a principle of human experience as well,  and we should find examples of it at work in history.

I do think we see this principle at work in German foreign policy from at least the accession of Kaiser Wilhelm II and his dismissal of Bismarck in 1890. 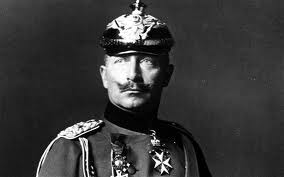 One might even argue that it applies to Bismarck way back in the 1860’s.  But let’s just focus on Germany from 1890.

They directly challenged England by tripling their naval budget between 1900 and 1910.  They doubled military spending between 1910-1914.  They got involved in Africa and tried to obtain land in South America.  Perhaps in hurrying so much to “keep up with the Joneses” they did not see how ultimately self-destructive colonial acquisitions could be.  They even tried to acquire the Baja Peninsula.   Next time you are in a hurry look around and you will see how it makes others nervous.  The problem is, when we hurry we rarely look around ourselves at all.

Strategically, by adopting the Von-Schlieffen plan, they had to ‘hurry’ through Belgium so they could beat France in time to deal with Russia.  In their need for speed they committed various atrocities to get to France as soon as possible.  In the trenches they introduced chemical warfare because in their minds they had to hurry and shorten the war.

All these things worked against them long-term.  The Kaiser did not understand the power of the press as Bismarck did.  They brought on the moral outrage of the rest of the combatants and eventually their unrestricted submarine usage (also another attempt to hurry up and win) brought the U.S. into the war for good measure.  Disaster awaited them at Versailles.

Surely Napoleon also hurried.  One can see this through his whole personality.  Politically, he had no patience to establish genuine connections with those he conquered and made relatives his private puppet rulers.  We know this is not the way to win friends and influence local populations, who naturally turned on him the moment they had an opportunity.

I also think Hannibal hurried.  This, I admit, is more debatable.  He showed more political sense than Napoleon, and certainly more than Wilhelm II.  Yet he could have opted to spend time making his holdings in Spain secure and later invaded Rome from a much more secure base of logistical and political support.  Instead, he went for broke, and that’s how he ended up.

Has being in a hurry ever worked for any country/civilization?  Can we think of other failures rooted in hurry?

Has it worked for any particular company?  Have those that raced to market certain products first stood the test of time?