Historians are people too, and they need jobs just like everyone else.  One way some seek to perpetuate their role in society is by coming up with new and different perspectives on the past.  I am all for reexamining things and keeping them fresh, but . . .  recently I have noticed a few attempts to redeem Rome’s most notorious Emperors, Nero and Caligula, and I wonder if this carries things a bit too far.*  Still, despite my concerns that this represents something “weird for the sake of being weird,” we must contend, for example, with the fact that Nero had a great deal of popularity with the masses in general.  We need not assume that Tacitus and Suetonius deliberately lied and distorted things to wonder if they failed to give us the full picture.

Aloys Winterling recently published a well-received biography of Caligula.  Some reviews got my ire up with the word

“rehabilitation,” but upon further examination, Winterling seeks to condemn Caligula in a different way, and not “rehabilitate” him.  Winterling allows us to understand Rome and his reign in a different light.  Traditionally most assume that Caligula’s actions had their roots in some type of madness, and this allows for us to excuse them in some ways, obscuring Caligula’s true motives.**

The Augustan synthesis fixed the bleeding in Rome after a century of intermittent civil war, but at a price of the straightforward approach Rome prided itself on.  Augustus may have “pretended” not to want power and the Senate likely “pretended” to rule.  But in the end, Augustus had the power and the senate didn’t. Augustus performed an intricate kibuki dance of sorts that allowed everyone to assume, if they wished, that Rome was still Rome, after all.

Caligula wanted to end this charade, Winterling argues, by carrying its logic as far it went.  He deliberately sought to expose the hypocrisy involved amongst Roman elite.  So, he made his horse a senator and consul as a deliberate insult, as a joke, not because he was “crazy.”  Nero had a thing for the stage and part of me wonders if we might not see Caligula’s time in power as something akin to Andy Kauffman as Emperor, where all masks come off because all masks are on, and things are funny because they are . . . not really that funny.  His goal seemed to be make people feel uncomfortable, something slightly akin to an act of social ‘violence,’^ which of course would presage the very real violence that characterized Caligula’s reign.

In attempting to strip off masks by putting on masks–such as “pretending” to be a god (though he might really have believed it?  Anything is possible). Many other examples exist of this.  When Caligula fell ill one Senator prayed for his recovery and, in an act of great ‘devotion,’ pledged his life for the health of the emperor.  When he recovered, Caligula made him go through with his pledge and end his life. No more masks, no more empty words. Caligula sought to break everything down and rule by himself with no need for social niceties.  One might think of Caligula’s reign as a 3 1/2 year stage act of a much more evil version of Andy Kauffman.

Diplomacy (and most aspects ofpolitics, I suppose) involves masks, and wearing such things must get tiresome.  One has to say things indirectly, if at all.  One says things with posture, and what one eats.  The job grants one high status and honor, yet it often requires a self-effacing temperment that often will not mesh with such requirements.  To say what one wants, to be an authentic man, such is the dream of every romantic.  It is this same romantic who no doubt envisions that his bracing personality is just what the world has been waiting for.

Liuprand of Cremona came from northern Italy as an ambassador for Emperor Otto in the middle of the 10th century A.D. 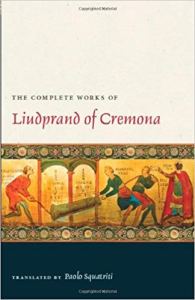 Otto sent him to Constantinople in hopes of arranging a royal marriage.  Liuprand’s life as a churchman gave him an excellent education, and he had a reputation as a fine speaker.  He seemed the best possible candidate to navigate the highly developed and occasionally strange world of Byzantium.

Liuprand wrote Otto an account of all of his exploits, and what makes his work so enjoyable is that he thinks he’s doing a great job.  He’s “telling it like it is,” not giving the Byzantines an inch!  He fights a valiant war of words on behalf of his emperor, of whom he seems to forget . . . wants a marriage into the Byzantine royal family.

One exchange, involving precedence and the tension between eastern and western churches, got a bit testy.  The Byzantines speak first (Liuprand writes in the first person) . . .

“But he will do that,” said Basil, the head of the imperial bedchamber, “when he makes Rome and the Roman church obedient to his nod.”

Then I said, “A certain fellow, having suffered much harm from another, approached God and said, “Lord, avenge me of my enemy!” God answered him, “I will do it, on the day on which I will give each according to his deeds.”

Then they all left the disputation shaking with laughter . . .

Liuprand walks away angry, but doesn’t seem to recognize the light-hearted touch from the Byzantines throughout this conversation, obvious in their laughter over his theological “zinger.”

In another instance, Liuprand grows incensed at the “masks” of the Byzantines, as they honored the emperor’s father, with the traditional song, “God grant you many years,” often sung in Orthodox churches even today.  We enter his narrative moments after he has been chastised by the emperor for finding their food too dainty and smelly.

[The Emperor] did not permit me a reply to his words, but instead ordered me back to the table.  Then his father entered and sat down, a man, it seemed, born 150 years before.  In their praises, or rather, their venting, the Greeks sang out, asking God  to multiply his years.

From this we can discern just how ignorant and greedy the Greeks are, and how enamored they are of their own glory.  They wish upon an old man, indeed–a walking corpse–what they certainly know nature will not allow, and the walking corpse wishes that which he knows will never happen, which he knows God will not do, and would not even be good for him if He did do it, but bad.

Liuprand is just the man to set them straight, if only they would listen!  How greedy the Greeks are, indeed!

As one might surmise, Liuprand failed to secure a royal bride for Otto. He has no capability to see his role in this disaster, or perhaps thinks it just as well.  How awful, he must have thought, to think of his leige Otto allying himself with these fish-eating onion lovers. Early during his visit he had been allowed to purchase some costly robes (though LIuprand seemed to despise all he saw and met, he did like their robes), but now the Emperor asked for them back.

When this was done, they took from me five very precious purple robes, judging that you [that is, Otto] and all the Italians, Saxons, Franks, Bavarians, Swabians, indeed all the nations, are unworthy to go about decked in cloth of that quality.  But how unsuitable and how insulting it is that soft, effeminate, long-sleeved, tiara wearing, hooded, lying, unsexed, idle people strut about in purple, while heroes, that is, strong men, who know war, full of faith and charity, in submission to God, full of virtues, do not!  What an insult, if that is not!” [he does add, we should note, that they reimbursed him for the price of the robes].

I know that many noble and worthy souls love the poem “Invictus,” by William Ernst Henley, but I have never liked a thing about it. The bald pagan statements in the poem always seemed to me a bit ridiculous and silly coming from the pen of a Victorian Brit.  I won’t argue the point too strongly, but I think we can at least say this, that when diplomats and politicians in sticky situations attempt to be “captains of their souls” and give nothing to no man, they become at best failures, at worst, a horrible wreck of humanity.  The final irony may be that such scrupulously confident people often end up the butt of jokes.

*Most academics, especially in the humanities, tend to lean left politically.  I wonder then, if we should be encouraged or worried that a variety of them seem to be trying to redeem, or perhaps lean towards “explaining away,” autocratic emperors.

**We should not call Hitler, Stalin, Pol Pot, etc., “mad” unless we do wish to excuse them in some way.

^For any who might not know, Tony Clifton is Andy Kaufmann.  I am one of those who (his Might Mouse routine aside), do not find him all that funny.  In my defense, reading the entire Great Gatsby on stage as his ‘act’ might be audacious (he actually did this at least once), but is it funny?  You might laugh at hearing about it, but would you pay to see it?