This week we returned to Europe in the mid 18th century and began to look at the ideas that shaped the coming French Revolution.  In this “Prelude to the Revolution” unit I hope that students will see that ideas have consequences.  The French pursued truth, or at least what they believed to be truth, with a passion, but this pursuit nearly destroyed them as they attempted to entirely remake their nation from the ground up.

How then, can we recognize truth?

Christians have many answers at their disposal to this question, but we discussed in class that many of our foundational truths are truths in tension.  So we see that God is one God in three persons, Christ is fully God and fully Man, Scripture is the Word of God written by men, and so on.  Sometimes we can know that we are close to Truth when we feel pulled in different directions at once.

Christians also realize that Ultimate Reality (God Himself) is personal, not abstract or propositional.  In inviting us to know Him, God does not want us primarily to know truths about Him (though this too is necessary), but to have a relationship with Him.  So truth must have an incarnational, or personal aspect to it for it to fully achieve the status of “Truth.”

French society needed reform in the mid-18th century.  The dominance Louis XIV bought came at a cost, and one cost was the inherent contradictions that Louis’s France left unresolved, and in fact widened.   When untethered from “truth in tension” we might expect wild swings or “over-corrections” in the ideas and solutions of the time.  The Enlightenment is no exception.  But the Church needs to have judgment begin at home, for it was precisely the Church’s relative weakness in the aftermath of the wars of religion and the Scientific Revolution that opened the door for people to seek truth elsewhere.

The Enlightenment had many noble motives and goals.  Many “philosophes” (as French Enlightenment philosophers were known) saw that society had become a kind of anachronism, guided by long outdated feudal customs.  Certain areas in society operated autonomously, without reason or justice.  Many stories abound for example, of “press-gangs” rounding up derelicts or drunks and forcing them into the navy or infantry.  From the perspective of many, society seemed to be made only for the elite, or for those with connections, or special, secret knowledge (the echoes of Louis’s ridiculous system at Versailles form a good example).  Enlightenment thinkers sought to free society from archaic mystery and make it livable for the common man.  Reason’s clear light revealed the absurdity of class and privilege.  The Philosophes prided themselves as sensible men.  Ben Franklin, for example, records basic advice like, “A penny saved is a penny earned.”  No wild Platonistic musings here, thank you very much.

One sees this spirit animating their music as well.  Haydn, for example, wanted to write for the farmer and tradesman, so his music has a popular danceability to it that one immediately perceives.  Odd meter changes, wild swings in tempo, and so on might have been perceived as “elitist,” or inaccessible.

In the early Enlightenment one also sees a glorification of the everyday.  Those outside the nobility, like Christopher Wren in England, got picked to design St. Paul’s Cathedral.  Enlightenment era paintings depicted women realistically, and showed life as it was really lived by most people.  It elevated simple pleasures of good company and conversation.

For centuries the Church had controlled much of daily life, especially education.  This too needed freed for “the people.”  With people loosed from institutional religion, they would be freed to be their “natural” religious selves.   No more obscure doctrines, no more mystery, just the clear light of reason.  So in the end, society, education, religion, culture — all this seemed to come down from their pedestals on high and into the people’s hands.  The early years of the Enlightenment must have been quite exciting.

For all of their realism and so-called common sense, the philosophes tended to be quite unrealistic about human nature.  For them, part of their liberation from mankind meant liberating them from their sense of sin.  “You’re not bad, just ignorant!”  But in severing people from their sense of sin they dehumanized them.  We know we sin, and we know that it is part of being human to sin.  To say that sin doesn’t exist makes us less responsible, and if we are less responsible, we are less human.  Again, Enlightenment thinkers surely thought they were doing mankind a favor by removing the idea of punishment for sin.  I want the students to appreciate the Enlightenment’s strengths, but the tragic irony of the Enlightenment is while they sought to liberate they set us on a path of potential slavery.  We deserve to be held responsible for sin because we are human beings responsible for our actions.  Dogs are not responsible for their actions.  C.S. Lewis elaborates on this in his essay “The Humanitarian Theory of Punishment.”

The Enlightenment frowned on mystery.  We know that many key doctrines of Christianity are mysteries at heart, but what about other areas?  Is not life itself mysterious?  What about love?  Guys, what about women?  Again, to be fully human we must have a sense of mystery about our existence.  In its eagerness to redress an imbalance, the Enlightenment abandoned “truth in tension” and created other kinds of problems, some worse than those it fixed.

The ironic tragedy of the Enlightenment is that while they sought to liberate, they ended up dehumanizing people on a path to slavery, for dehumanization is the first step towards control.  One sees this in subtle ways in the “Smile of Reason”  in many philosophe portrayals: 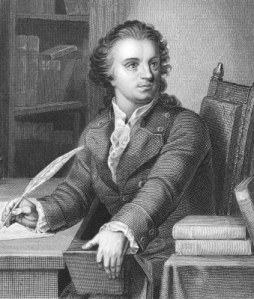 The constant tight-lipped smile of these reasonable, agreeable people tips the hand of the Enlightenment.  As Clarke notes, the philosophes might smile, but never laugh.  They restricted what it meant to be human.  Life can be enjoyed, but only in moderation.  They prized control above all else.

I don’t want to overreach, but the Enlightenment insistence on control paved the way for some of the tyrannies of the French Revolution and beyond.  The Enlightenment gave us good things to be sure.  No doubt many good Christians made the best of what the Enlightenment had to offer.  But its legacy, like all heresies, continues to haunt us.