It might be a good sign when those one admirers disagree among themselves, but for me it can be painful.  Few have taught me more than G.K. Chesterton, but I also like Edmund Burke.  Had the two co-existed they would not have been friends.  Chesterton believed that Burke’s innate conservatism meant that he disapproved of any change at any price, or that whatever political and social order in existence had divine sanction behind it.  Burke tended towards the stodgy, but I think Chesterton overreacted.  I see Burke as a champion of workable, reasonable policy, an Enlightenment man in a Romantic era.  Perhaps this is what Chesterton, the art school dropout, could not forgive in Burke.  Practicality can be maddening. 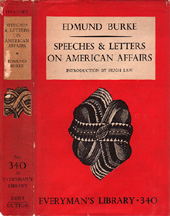 Burke’s marshaling of logic expressed in dense Enlightenment style can infuriate, all the more so when he’s right.  His Reflections on the French Revolution is a hard read but deserves its acclaim for its early prediction of all that would go wrong in France.   When I saw his Speeches and Letters on American Affairs for sale cheap, I felt I had to pounce and take a dose of good sense, albeit in protein bar form.

Burke speaks better than he writes, but I still found it rough going.  Despite this, Burke’s patented insight strikes again in England’s dealings with America. Burke saw England kill the golden goose between the years 1765-74 through one bad decision after another.  England never heeded his advice, and two wars resulted.  Burke’s thoughts have universal roots and application, and proceed as follows:

I hear the honorable gentlemen say, ‘I don’t care how we got into our predicament.  I only care now how to get out of it.’  . . . No possible good can come from this attitude towards our situation . . .

Burke calls England back to first principles.  Is the problem English debt, or colonial recalcitrance?  By 1774 the revolution had nearly begun, and England scrambled to make things right.  Burke saw England concerning itself only with dealing with whatever situation lay in front of them.  Constantly reacting, they never reflected.  One can’t solve a problem until you understand the problem, and this England never bothered to do.

In this case, Burke calls England to look in the mirror.  However bad the colonies have acted, we ourselves first damaged the relationship by our own actions.  Their policy adjustments thus amounted to little more than course corrections to avoid icebergs, when you should think more about heading south in the first place.

Besides, some of the things taxed were so trivial, that the loss of the objects themselves and their utter annihilation out of American commerce would have been comparatively as nothing.

Perhaps the English had a right to tax the colonists in some respects.  But Burke rightly calls out the English for foolish and paltry duties on things like playing cards.  Such taxes only aggravate and obscure whatever good purpose you might have.

Burke admits that the Tea Act had many benign and even generous provisions.  To then use force risked ruining everything.

“Incredible as it many seem, you know that you have deliberately thrown away a large duty [the normal course of trade in tea] for the vain hope of getting one 3/4 less, through every hazard, certain litigation, and possibly through war.”

Had they left well enough alone they would have collected plenty of money.  They reduced duties on tea, but then used force to ensure they would collect it.  Again, Burke argues that it appears that the true purpose of the British is to assert their authority rather than enrich their people and make peace.  This gets to the root of the problem itself — England had its priorities all wrong.

Force over time wastes away.

To repeal by the denial of our right to tax in the preamble would have cut, in the heroic style, the Gordian knot with a sword.

The English piddled around the fringes of the various taxes they imposed, modifying this or that over time.  True, sometimes they lessened the duties instead of increasing them, but this yo-yo act ensured colonial aggravation.  Had they simply denied their right to tax altogether they would solved the problem immediately.  Nor would it have cost them money in the long run.  Burke cites the exponentially increasing British imports pouring into America over the past 50 years.  Forcing certain duties, having the Americans object, followed by the inevitable British penalty of closing ports, has the British run the long way round for nothing, or less than nothing.  Much better to act on principle (which the colonists would respect) and be done with it.

Freedom is to them not only an enjoyment, but a kind of rank and privilege. . . . I do not mean, Sir, to commend the superior morality of this sentiment, which has at least as much pride and virtue in it; but I cannot alter the nature of man.

Burke acknowledges that some colonists talked far too much of liberty, perhaps without any sense of responsibility.  John Wesley certainly thought so.  Slavery proves it.  But Burke realized that England had no ability to change what the colonists believe.  Force would certainly not accomplish this, and likely make it worse.

But England would not back down, because at least on Burke’s reading of the situation, they cared more about asserting power than peace.  Perhaps they cared about peace, but it would have to be on their terms.  The outbreak of war and its result proved how wrong they were, and that sometimes stodgy, methodical wisdom is best after all.

I can’t assert this with blanket accuracy, but it seems to me that whenever nations disconnect from reality by doing one thing not for the purpose of the thing itself, but as a placeholder for something else entirely, the results never pan out.  One thinks of Johnson’s bombing in Vietnam.   No one thought the actual bombing particularly effective, but we assumed it would send a political message to the North.  We know how that worked out.  Burke’s message to live in reality stands the test of time.

One comment on “Edmund Burke on how to Prevent a Revolution”