As an author A.J. Toynbee could be controversial and intimidating.  His grand theories of the scope of history naturally had adherents and skeptics.  Toynbee repeated himself numerous times over the scope of his 12 volume magnum opus.  At times too, Toynbee’s “insights” seem like little more than average common sense, such as his observation that geography must present a challenge to encourage the development of a civilization.

But sometimes his insights, even if not earth-shattering, are nonetheless important to contemplate, and show their worth because of their applicability in different circumstances.  I have always thought that the book The World and the West a great entry point for those interested in Toynbee’s work.  My favorite chapter (the book is a collection of speeches given on a theme) is “The Psychology of Encounters” (available here for those interested).

His main point deals with how cultures interact with one another.  One of his arguments entails showing how when a culture gets transplanted into “non-native” soil, it may not “take” in the way it did so where originally planted.  He uses the rise of nationalism from the mid 19th-early 20th centuries.  The idea of nationalism grew up slowly and organically in England and France, and perhaps to a lesser extent in Russia.  But the exportation of this idea to other areas could have unintended and dangerous consequences.  I quote at length,

We can see why the same institution has had these strikingly different effects in these two different social environments. The institution of ‘national states’ has been comparatively harmless in western Europe for the same reason that accounts for its having originated there; and that is because, in western Europe, it corresponds to the local relation between the distribution of languages and the alignment of political frontiers. In western Europe, people speaking the same language happen, in most cases, to be huddled together in a single continuous and compact block of territory with a fairly well defined boundary separating it from the similarly compact domains of other languages; and, in a region where, as here, the languages are thus distributed in the pattern of a patchwork quilt, the language map provides a convenient basis for the political map, and ‘national states’ are therefore natural products of the social milieu. Most of the domains of the historic states of Western Europe do, in fact, coincide approximately with homogeneous patches of the language map; and this coincidence has come about, for the most part, undesignedly. The west European peoples have not been acutely conscious of the process by which their political containers have been moulded on linguistic lasts; and, accordingly, the spirit of nationalism has been, on the whole, easy-going in its west European homeland. In west European national states, linguistic minorities who have found themselves on the wrong side of a political frontier have in most cases shown loyalty, and been treated with consideration, because their coexistence with the majority speaking ‘the national language’ as fellow-citizens of the same commonwealth has been a historical fact which has therefore been taken for granted by everyone.

But now consider what has happened when this west European institution of ‘national states’, which in its birthplace has been a natural product of the local linguistic map, has been radiated abroad into regions in which the local language map is On a quite different pattern. When we look at a language map, not just of Western Europe, but of the world, we see that the local west European pattern, in which the languages are distributed in fairly clear-cut, compact, and homogeneous blocks, is something rather peculiar and exceptional. In the vastly larger area stretching south-eastward from Danzig and Trieste to Calcutta and Singapore, the pattern of the language map is not like a patchwork quilt; it is like a shot-silk robe. In eastern Europe, south-west Asia, India, and Malaya the speakers of different languages are not neatly sorted out from one another, as they are in western Europe; they are geographically intermingled in alternate houses on the same streets of the same towns and villages; and, in this different, and more normal, social setting, the language map—in which the threads of different colours are interwoven with each other—provides a convenient basis, not for the drawing of frontiers between states, but for the allocation of occupations and trades among individuals.

I thought of Toynbee’s insight when reading Ivan Morris’ excellent The Nobility of Failure.  In his book Morris 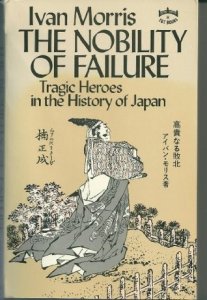 examines the idea of the Japanese hero through mythology, folklore, and history.  By comparing various stories over two millennia a consistent picture emerges.

The last chapter naturally deals with the kamikaze attacks at the end of W.W. II.  Previous to W. W. II heroic status could only be attained by the aristocratic class & samurai class.  But Toynbee’s theory of the unpredictability of cultural transference applies in this case.  This transference on a cultural level can have the same kind of unpredictable detrimental effect as it can on the ecological level.  Think of the kudzu plant, which serves a good purpose in Japan’s unusual geography.  Transplant it to the southeastern U.S., however, and it will take over entire forests. Beginning in the mid-19th century Japan got exposed to western ideology, including obviously the idea of equality.  But what equality meant for Japan in this case became a horrifying kind of parody — now everyone can kill themselves and attain heroic status.

Hence the kamikaze pilots.  As Morris points out, the Japanese did not carry out these attacks primarily because they believed it would lead to victory.  No one really believed in victory by the end of 1944.  Such attacks, however, would certainly lead to the pilots achieving hero status in Japan.  They mimicked almost exactly the form and pattern laid down in Japan’s past.

Below I include various excerpts from Morris’ book.  Another quote from Toynbee illustrates the tragedy of Japan in W.W. II.

Since our discovery of the trick of splitting the atom, we have learned to our cost that the particles composing an atom of some inoffensive element cease to be innocuous and become dangerously corrosive so soon as they have been split off from the orderly society of particles of which an atom is constituted, and have been sent flying by themselves on independent careers of their own.

Excerpts from The Nobility of Failure

So pure and radiant!

Beckoned to a chair, the young man [Lt. Seki] sat down facing us.  Commander Tamai patted him on the shoulder.  “Seki, Admiral Onishi himself has visited the 201st air group to present a plan of the greatest importance to Japan.  The plan is to crash-dive our Zero fighters, loaded with 250 kilogram bombs, into the ships of the enemy.  You are being considered to lead such an attack.  How do you feel about it?

There were tears in Tamai’s eyes as he spoke.

For a moment there was no answer.  Seki sat motionless, eyes closed, in deep thought.  Then calmly, raising his head, he said, “You absolutely must let me do it.”  There was not the slightest falter in his voice.

When it was clear that they understood my message [about forming a kamikaze squadron], I turned and said, “Anyone who wishes to volunteer for today’s sortie will raise his hand.”

The words were hardly spoken before every man raised his hand.  Several of them left their seats and pressed up against me, pleading, “Send me!  Please send me!”

I wheeled about and shouted, “Everyone wants to go.  Don’t be so selfish!”

[As the planes moved to the runway for takeoff] Lt. Nakano raised himself in the cockpit and shouted, “Commander Nakajima!”

Fearing that I had done something wrong I rushed over.  His face was wreathed in smiles as he called, “Thank you Commander!  Thank you very much for choosing me!”  I flagged him on with a vigorous wave of my arm, and other pilots shouted the same thing.  “Thank you!” they shouted.  I pretended not to hear these words, but they tore at my heart.

It is of no avail to express it now, but  in my 23 years of life I have worked out my own philosophy.  It leaves a bad taste in my mouth when I think of the deceits of the wily politicians upon the innocent population.  But I am willing to take orders from the high-command . . . because I believe in the beautiful polity of Japan.

The Japanese way of life is indeed beautiful, and I am proud of it, as I am of Japanese history and mythology, which reflect the purity of our ancestors and our past.   And the living embodiment of all wonderful things in our past is the Imperial Family which, too, is the crystallization of the splendour and beauty of Japan and its people.  It is an honor to give my life for such beautiful and lofty things.

Please congratulate me.  I have been given a splendid opportunity to die.  This destiny of our homeland hinges on the decisive battle in the seas to the south where I shall fall like a blossom from a radiant cherry tree.

How I appreciate this chance to die like a man!  . . . Thank you, my parents, for the years during which you have cared for me and inspired me.  I hope that in some small way this deed will repay you for what you have done.

Thoughts of victory will only bring defeat.

When we lose, let us press forward, ever forward!

Japan is bound to be defeated.

It is then that we Japanese

Muse infuse into this land

A new road to restoration

Will be ours* to carve.

If by some strange chance, Japan should suddenly win this war, it would be a fatal misfortune for the future of the nation.  It will be better for our nation and people if they are tempered through real ordeals, which will serve to strengthen.

Listen carefully!  Imagine you have nothing in your hand but a pebble, and you need to take down a tree.  What is the best method?  To throw the pebble, or to take the pebble in your hand and strike it against the tree yourself?

Probably the most fearsome of all scenes took place on Saipan in 1944.  When organized military resistance became impossible soldiers  — some 3000 of them — armed with nothing but sticks came charging at the American concentrated machine-gun fire.   They were mowed down to the last man.   A particularly macabre note was provided by wounded Japanese soldiers who limped forward, bandages and all, to the slaughter.

Subsequently, entire units of Japanese soldiers knelt down in rows to be decapitated by their commanders, who then in turn committed ritual suicide.  Hundreds of others shot themselves in the head or, more commonly, exploded themselves with hand grenades.  As the marines advanced through the island they witnessed one mass suicide after another, culminating in the last terrible scene when Japanese civilians, including large numbers of women with children in their arms, hurled themselves off cliffs or rushed out into the sea to drown rather than risk capture.