We began the actual fighting of the Revolutionary War this week, with a focus on the generalship of George Washington.

But we began by looking at the tactics employed by the colonials at the Battle of Concord.

After the British broke through the lines like a knife through hot butter at Lexington, the colonials changed tactics after the British abandoned their search for weapons in Concord.  Rather than meet them out in the open, the hid amidst the treelines, taking potshots and then melting back into the woods.  The British had no effective way of countering this.

This infuriated the British, of course.  This was not how men fought!  What kind of coward fires from safety and then runs away?  Battle was meant as a test of honor, solidarity in the ranks, and courage under fire.  Fighting as the colonials did at Concord might be akin to one team poisoning the water of their opponent.  If they then won the game, would we call that victory?

There is a possibly apocryphal story of the Battle of Fontenoy, between the British and French in 1745.  Tradition says that both sides argued about who which side would strike the first blow. Lord Hay, the British general, supposedly asked, “Gentlemen of France, perhaps you would care to fire first?” 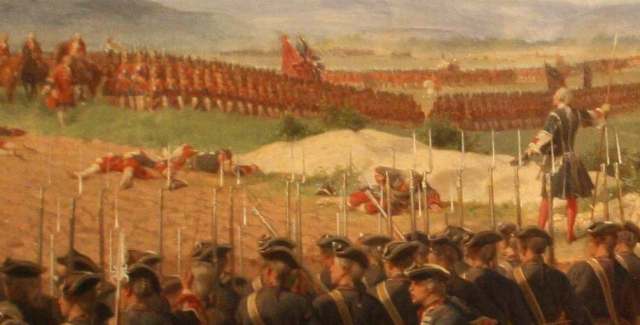 For the Europeans, for battle to be decisive, for it to mean anything, it must be ‘fair.’  Victory without ‘fairness’ solved nothing.

Students wisely countered with the fact that this analogy of a sports team doesn’t quite add up.  First of all, it’s against the law to poison water, where there is no law saying that armies must line up in the middle of field.  Secondly, why should the colonials have to fight on British terms according to British strengths?  The  colonial troops should be free to do what they do best.

These are good arguments.  What happens when we apply them to our current situation in “The War on Terror?”  We would all wish that the terrorist radicals would all line up in a field somewhere.  If this happened, the “War on Terror” would be over in about 15 minutes.  Naturally, they possess enough intelligence not to do this, so they choose other tactics.  Does this make them cowards?  Are they “playing fair?”  Where are the differences?  Some said that the differences lie in the treatment of civilians, and this is an excellent point.  Does the same difference apply to the Ft. Hood shooting a few years ago, where only military personnel were targeted?

To turn this further on ourselves, we should confront the fact that our extensive use of drones inspire a great deal of hatred.  For our enemies (and the innocent civilians in the line of fire), our use of drones is ultimately a cowardly act.  We put others at risk while risking nothing ourselves.  The drones hover in ways not accessible to retaliation, and they strike without giving anyone a chance to escape.  My guess is that if terrorists flew a small drone into a large city remotely and attacked people, we would be tempted to call it a “cowardly act.”

It’s important for us to realize (returning to our original context) that for the British raw military victory did not count in the same way that honor and integrity did in battle.  Wars happened, but wars should take place within the confines of civilization, not outside it.  How one fought was in itself a victory of sorts, and could not get separated from the tangible results on the field.

During our look at Washington, we noted that he won only 3 of his 9 revolutionary war battles.  Previously to the American Revolution, he may have been responsible for the Fort Necessity disaster with the French, and he accompanied Braddock on his ill-fated attempt to capture Fort Duquense.  Does he deserve his high reputation?

Some years ago I came across a book entitled, ‘The 100 Greatest Generals of All-Time’ (or something very close to that).  Lists are always fun for me, so I opened it out of curiosity.  As one might expect the usual suspects of Julius Caesar, Alexander, Napoleon, Ghengis Khan, etc. could be found in the top 10.  But his number 1 general of all-time?  George Washington.

This shocked me so I had to read his thoughts (was this shock value part of the author’s motivation for listing him at #1, and not say, at #4?).  His points were these:

As I mentioned previously, it is possible the author listed Washington so high to distinguish his book from others. Still, I feel he has solid arguments to at least rank him highly.  I wanted to use our look at Washington to introduce the concept that in war success can come in many ways.  Since war is ultimately a political act, the battles themselves are simply one extension of the conflict.

When we think about war in broader terms, we see how many of England’s advantages (such as an elite professional army) meant little in the political context of the Revolution.  They had the unenviable task taking someone who didn’t want to be your friend anymore and making them a friend.  Would beating them up do the trick?  Over the previous 10 years (1764-75) the British proved politically inept with the colonies, so a political solution would not come easily for them.  If they went the route of force more or less exclusively they would need to absolutely pulverize the colonies so badly that further resistance would be physically and psychologically impossible.   As long as the Americans kept their heart beating, they could outlast England.  Washington, I think, understood this to his advantage.

Next week we will look at the battles of Saratoga as well as the Declaration of Independence.

Enjoy the weekend, and many thanks,