I remember that back in my day, we had multiple sections of analogies on the SAT.  I always thought they were fun, but alas, analogies are no longer part of the test.  Apparently different reasons exist as to their absence, ranging from cultural bias to not wanting the test to seem too “tricky.”  I care little for standardized tests so I wouldn’t argue the point too strongly, but I think any look around at our discourse, where everyone who sneezes wrongly gets compared to Hitler, shows that we need more rigorous analogical thinking in our lives.

Of course analogies can be tricky, but making sense of reality requires them, so we need good ones and we need to distinguish good ones from bad. As long as we know that using a three-leaf clover to describe the Trinity works in some ways and fails in others, we can benefit from the illustration.  But using a car, a cigarette, and an oven as a replacement analogy can’t help anyone, despite the fact that all three can sometimes produce smoke.

MIT professor Vaclav Smil specializes in the study of energy, but he has a hobby of reading Roman history.  In the wake of our 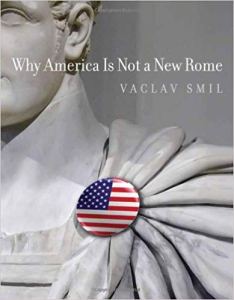 post 9/11 military ventures, and especially after things in Iraq began to go south, we saw many academics proclaiming the demise of the American “empire,” with comparisons to the fate of Rome everywhere across the media landscape.  Smil smelled a rat, and wrote Why America is not a New Rome to counter this wave.  I wish he put more thought into his title, but it points to the straightforward approach of his work.  He brings the discipline of a scientist to the fog of blogs and talking heads.

The question is one of analogy–how alike are the American and Roman experiences?

The comparisons should not surprise us, and have some basis in fact.  Our founders modeled our constitution on Rome’s.  Our early years resemble the heyday of the aristocratically oriented Roman Republic governed primarily by a strong Senate.  Since the Industrial Revolution, and especially since the Great Depression, we have witnessed the continual growth of executive power until now Congress has nearly reached rubber-stamp status, akin to the senate in Rome under the emperors.

Briefly, then, the case for strong links between America and Rome:

Stated this way some connections seem strong, but Smil doesn’t buy it.

First we can consider the concept of “empire.”  Some understand that if America has an empire, it is “informal,” and “an empire without an emperor.”  Smil argues that some concepts of empire are so vague as to be meaningless, and pushes for a very specific definition:

Empire means political control exercised by one organized political unit over another unit separate from it and alien to it.  Its essential core is political: the possession of final authority by one entity over the vital political decisions of another.

With this definition in place we should consider if America ever exercised imperial ambitions.  Perhaps one could begin with the Mexican War of 1846, or perhaps earlier with the Indian wars that made the Northwest Territories into Ohio, Indiana, and Illinois. With our various conflicts on the continent we did not so much seek to control ‘alien’ peoples as much as we sought to move in and displace them.  Perhaps one could argue that the Spanish-American War made us an imperial power, but even then, we gave Cuba independence immediately and the Philippines got their independence right after W.W. II.  Smil spends a lot of time on this rather technical argument over what exactly constitutes an empire.  He has some good points to make, but only stylistically.  The real question, I think, involves how much power the U.S. has vis a vis the rest of the world.

Here Smil gets more interesting and convincing.  He cites a variety of data to show that American power, or at least our relative share of power (in political, economic, and military terms), has actually declined dramatically since the end of W.W. II.  Our global share of economic output has dropped by at least 1/3 since 1945, with continuing trade deficits largely due to reliance on foreign energy.  We send much less of our military abroad than we used to.  True, we have hundreds of military bases all over the world, but less than 20 of them have more than 1000 troops.  President Eisenhower served as our top military commander in our most glorious and successful war.  Yet he denounced the “Military-Industrial Complex in his farewell address.  One cannot even conceive of any Roman ever doing any such thing.  Empires do not act this way. 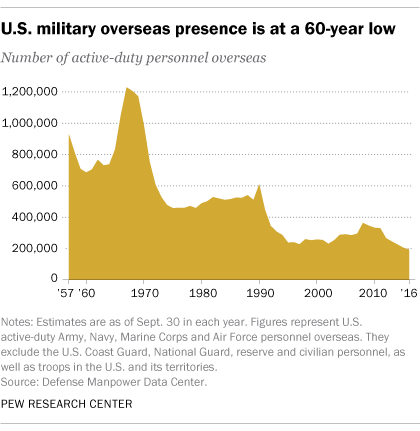 Smil agrees that we might call the U.S. a “hegemonic” power and not an empire.  But . . . he argues that we are either a weak hegemon or a benign one.  Castro ruled Cuba for decades and all agreed he posed a potential threat to our well being, yet we could do nothing to stop him.  Similarly, we could not get rid of North Korea or beat North Vietnam.  Smil continues,

Germany was defeated by the United States in a protracted war that cost more than 180,000 lives, subsequently received America’s generous financial aid to resurrect its formidable economic potential, and is home to more than 60,000 U.S. troops.  Yet when its foreign minister was asked to join the Iraq War coalition, he simply told the U.S. Secretary of Defense, “Sorry, you haven’t convinced me,” and there the matter ended.

No less tellingly, the Turkish government (with NATO’s second largest standing army and after decades of a close relationship with the U.S.), forbade US forces to use its territory for the invasion of Iraq, a move that complicated the drive to Baghdad and undoubtedly prolonged the campaign.  America in a time of war could not even count on two of its closer allies, but there was no retaliation, no hint of indirect punishment, such as economic sanctions or suspension of certain relations.  One could cite many other such instances . . . both illustrating America’s ineffective hegemony and non-imperial behavior.

With a proliferation of graphs and paragraphs like these, Smil makes a good case that America exercises far less power than its critics at home and abroad surmise.  Smil’s book is not brilliant, but he writes with a concision and clarity that cannot but convince the reader.

Or perhaps, very nearly convince.  American political culture struggles for coherence at the moment, but we have experienced times in our past very much like this before.  We have a disconnect between cultural elites and everyday people, but as Smil points out, this happens in almost every advanced civilization.  Economic inequality is a problem, but again, Smil shows how this tends to happen in many advanced economies, and in any case, our inequality now is not nearly as great as it was in the late 19th century.  By these measures we are no more an empire, or no more in decline, than other countries with power at different times.  The analogy is too thin to make anything of.

But . . . perhaps the strongest point of comparison lies elsewhere.  Toynbee argued that the military and economic problems Rome experienced in the 3rd and 4th centuries AD had their roots in the spiritual detachment of stoicism.  In a similar vein, Eric Voegelin wrote frequently that global power and global influence (of which the U.S. certainly has in some measure) easily leads to a gnostic view of the created order, which again inspires a detachment and loss of engagement.

Perhaps this should be our biggest concern.  We have recently legalized pot, the new drug of choice (in contrast to stimulants like cocaine of 30-40 years ago).  The digital revolution allows us to entertain ourselves with our screens and enter fantasy lands alone in our rooms.  Recently the Caspar mattress company founded a line of stores dedicated to napping as an art form.  It may be a good thing not to have a political, military, or other such analogous connections to Rome.  Here’s hoping that our growing sense of detachment is not in fact the strongest point of comparison between us.