Some time ago I accompanied some students to a museum on a field trip when I encountered a harried-looking adult wearing a “Chaperone” sticker for another school.  Evidently he had gotten separated from his pack, but he didn’t seem to mind too terribly.  He had the thousand-yard stare of a man utterly defeated.  When I asked if he was supervising another group he chuckled, “You think so?  I have no idea what we’re doing or why we brought them here.”

I am proud of my students.  I have had 8th graders show far more interest on trips to museums than seniors from other high-schools I have witnessed, and yet even they have well-set limits.  The Walters Gallery in Baltimore is a wonderful museum.  Alas, at some point the students inevitably conk out and don’t care how old or rare a particular painting or artifact may be.  Any pleading or begging I might have attempted would only be met with the same thousand-yard stare I saw from the hapless chaperone.

And yet, these same students had endless energy on the bus ride for variously animated discussions on the merits of Panera or the next Avengers movie.

Now, this is not to say that I blame them at all.  I stand firmly by my appreciation for them.  But this experience of mine surely has a universality to it, experienced not just by every teacher that takes students to a museum, but anyone who has visited museums like this.  Why does “museum fatigue” set in so quickly not just for students, but for all of us?

The most obvious answer that comes to mind is that no one argues that museums are the ideal setting for such things.  To take a small thing and remove it from its context, putting it in a hushed room with lots of other things removed from their original context, surely limits their power.

I doubt that even museum curators would disagree with this, but I’m convinced this only begins to answer the question.

What makes the Walters a great place is that it packs a great deal into a small space.  Even if you wanted to linger, in about 3 hours you could go from ancient Egypt through the 1800’s in Europe and see the sweep of human culture.  And this led me to some thoughts as to why we have such a hard time engaging with the past. When you move through the Walters you can see a dramatic shift in the art and culture of different periods.  Almost everything from ancient Egypt has a direct religious purpose and is crafted with direct religious symbolism. Babylon is similar, though Assyria less so. You don’t always see the same direct ‘religiosity’ in Greece and Rome but it’s still there more often than we might think.  In the medieval world nearly everything had a distinct religious meaning, and a rich symbolic world lay behind most of what we saw with our eyes. The art from Egypt through the medieval world generally had this same quality–layers within layers of meaning that would have been intuitively obvious to those who lived in those times.  Of course the forms that they expressed this richness of symbolic meaning changed, but they all shared (more or less) in having this tapestry.

But beginning in the Renaissance (with more realistic depictions?, more overt interest in the natural world?) and sharply accelerating in the 17th century, we begin to see a dramatic shift. We could argue about why this happened (the Reformation was often iconoclastic, the Scientific Revolution happened, etc.) but that it happened is perfectly obvious.  In the 17th century and beyond we see a focus on the natural world. The ‘layers’ of meaning so obvious in centuries prior seem absent. The tree is just a tree, the man is just a man. If the layers are there they are no longer part of a general cultural understanding, but have to be supplied via individual interpretation.

If one thinks students incapable of finding layers of meaning within images, simply observe the world of memes.  Here one witnesses students discovering whole worlds within stock cultural images.  Alas that these meanings and references remain almost entirely self-referential within a shallow cultural context.  Still, the staying power of memes surely has something to do with the joy and satisfaction they take in discovering and creating these endless loops of meaning.  So, while in my snooty and grumpy way I generally look down upon meme culture, I suppose I should see glimmers of hope that students not only can see such layers, but also enjoy finding them.

This led to some other thoughts and possible realizations.

Many have noted and lamented the decline of the influence of the text in our society, and we can point to a variety of causes for this.  No one questions that this will create a different kind of culture and eventually a new way of understanding.  The shift may be painful, but will we end up worse off?  In the “Phaedrus” Socrates recalls the Egyptian myth of Thamus and Theuth, in which the merits of writing are contested by Thamus.

At the Egyptian city of Naucratis, there was a famous old god, whose name was Theuth; the bird which is called the Ibis is sacred to him, and he was the inventor of many arts, such as arithmetic and calculation and geometry and astronomy and draughts and dice, but his great discovery was the use of letters. Now in those days the god Thamus was the king of the whole country of Egypt; and he dwelt in that great city of Upper Egypt which the Hellenes call Egyptian Thebes, and the god himself is called by them Ammon. To him came Theuth and showed his inventions, desiring that the other Egyptians might be allowed to have the benefit of them; he enumerated them, and Thamus enquired about their several uses, and praised some of them and censured others, as he approved or disapproved of them. It would take a long time to repeat all that Thamus said to Theuth in praise or blame of the various arts. But when they came to letters, “This,” said Theuth, “will make the Egyptians wiser and give them better memories; it is a specific both for the memory and for the wit. “

Thamus replied: “O most ingenious Theuth, the parent or inventor of an art is not always the best judge of the utility or inutility of his own inventions to the users of them. And in this instance, you who are the father of letters, from a paternal love of your own children have been led to attribute to them a quality which they cannot have; for this discovery of yours will create forgetfulness in the learners’ souls, because they will not use their memories; they will trust to the external written characters and not remember of themselves. The specific which you have discovered is an aid not to memory, but to reminiscence, and you give your disciples not truth, but only the semblance of truth; they will be hearers of many things and will have learned nothing; they will appear to be omniscient and will generally know nothing; they will be tiresome company, having the show of wisdom without the reality.”

Of course Egypt had writing, but even that writing was highly symbolic.  They had an overwhelmingly visual culture but achieved a very high level of civilization for millennia.  The Gothic age also had writing, but one suspects that this writing was not fashioned primarily to be read: 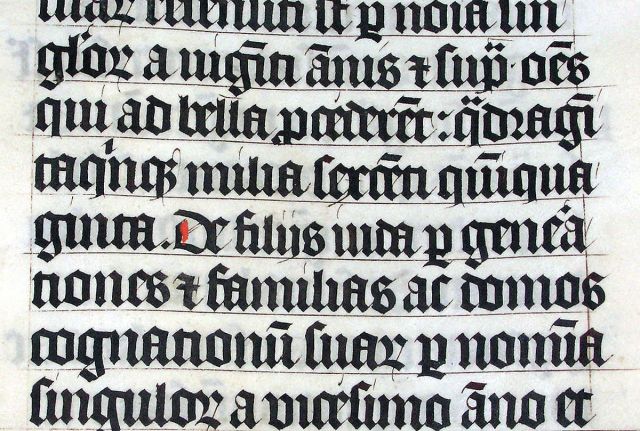 Though it may not be quite as obvious to some, their highly visual and religiously oriented society achieved quite a high-level of civilization.*  Their perception was more immediate.

As an example of our poverty of perception surrounding images and meaning, I refer to the famous “ichthus” symbol for Christianity.  One sees this symbol many places, and who can miss the scintillating war of fish magnets/Darwin fish magnets/anti-Darwin fish magnets on the bumpers of cars?  Though the symbol has been around in modern perception since the 1970’s, I never heard anything about the symbol except that the Greek letters for “fish” resemble the letters for “Christ.”  Of course one might also think of the direct reference to the miracle of the feeding of the 5000, or the fact that some of the apostles were fisherman before they met Jesus.

But the indirect symbolic meaning has much greater depth and wholeness.  To quote Leonid Ouspensky,

The first and most essential meaning of the fish is therefore Jesus Christ Himself.  Some ancient writers occasionally call our Lord, “the Heavenly fish.  We find the image of a boat, symbol of the Church, carried by a fish: the Church rests on Christ its founder.  To represent Christ in the midst of Christians united in baptism, little fishes surrounded by a large fish were often portrayed [in early Christian art].  “We are little fish,” Tertullian writes [ca. A.D. 200], “we are born in water like our fish Jesus Christ, and can only be saved by staying in the water.”**  Thus, the symbolism of fish leads back to that of water, that is, to baptism.”

Here we see a whole history, a whole theological understanding, a whole world to explore.  We must recover this sense of the “things” we see if we wish to re-enchant ourselves.

*The great Kenneth Clark ranks 12th century Europe as one of the great ages of the history of civilization.  John Anthony West, a devoted reinterpreter of Egyptian civilization, makes an interesting comparison between Gothic cathedrals and Egyptian temples.  While he is not a Christian, and seems perhaps slightly tilted against it in general, he admitted that the Gothic cathedrals communicate something directly to the soul.

**Hence the practice of annointing oneself with holy water as one enters and leaves some churches, not so much as a reminder of this, but as a way of connecting to these truths.