As Tyler Cowen would say, file what follows under “speculative” . . .

Recently NBA superstar Kevin Durant stunned the sports world by leaving the Oklahoma City Thunder and signing with the Golden State Warriors.  To be more precise, what shocked and troubled many people was not so much that he left Oklahoma City, but that he went to an already dominant and record-setting team.

Sports has morphed into a weird place in our culture.  We have 24 hour sports television and radio.  These media outlets discuss far more than the games themselves.  Rather, sports has become a springboard for all other kinds of topics ranging from race, sexuality, and so on.  Sports has become possibly the most visible bell-weather of our culture.  Look at the recent inclusion of female announcers (not just sideline reporters) on Sunday Night Baseball, for example, or the presence of a trans-gender athlete in ESPN’s most recent ‘Body Issue.’

So when the sports world blows up over something, it signals that a fault-line has moved close to the heart of our culture.

We give our star athletes huge amounts of money and adulation.  In exchange, we expect them to follow a code.  This code applies really only to the superstars, however, and perhaps especially to NBA superstars.  Football is still the bigger sport, but no player plays more than 1/2 a game, and with helmets and 22 people on the field, stars have less visibility.  Baseball players have longer careers and make more money, but the structure of the game limits the actions of hitters and fielders to a few brief moments.

In basketball the best players play about 80% of a given game and have multiple opportunities to display different offensive and defensive skills.   With only 10 players on the court, one truly great player can swing a game far more than in other sports.  Certain trends in the NBA point to its rise in prominence in our culture, first in terms of the money in the sport, 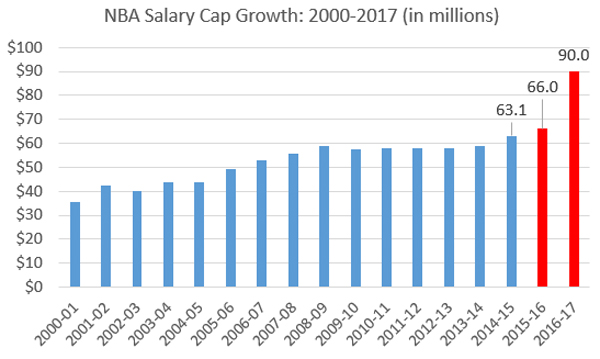 and then in the increase of viewers over the last few years.

The combination of our love of sport in general and the specifics of the NBA game gives basketball players the chance to reach transcendent status.

Apparently a code exists for NBA superstars that runs something like this:

Durant violated certain key aspects of this code.  He not only left his original team, he joined a team with perhaps the best player in the league already there in Steph Curry.  Not only that, he joined the team that had beaten his team in the playoffs.

He failed his test.  As one prominent commentator stated, “I’ve never seen a weaker move by an NBA superstar.”**

Durant himself justified his decision by stating simply that he thought it in the best interest of his development as a basketball player.  It seems simple enough, and of course morally no one can have any real problem with his decision.

The problem with the decision for many is that it was a “selfish” decision done to “chase a ring” in the “wrong way.”

The fact that we expect a kind of self-denial, a form of asceticism, in our NBA super-star athletes, indicates something close to worship.  For all true worship involves sacrifice in every major religion that has ever existed.  Many of our democratic cultural values tell us to choose what you want, maximize your opportunities, having options, and so on.  Rarely, for example, will any politician make the grave error of calling for self-denial on the part of all people.  But we do place this demand on those we wish to add to the pantheon of gods, on those we seek to worship.

If we think that sports might be America’s de-facto religion, we may not have to look any further than this.

************
If you have further interest, check out my podcast on sports and culture with Steve and Marc at the link below:
https://www.youtube.com/watch?v=Ot_GZ-P-1So&t=45s

*Lebron James’ return to Cleveland after a an ill-executed hiatus a few years ago, then winning a championship this year, perhaps only adds mustard to the above narrative.  Perhaps Kevin Durant might do the same a year or two from now.   The ‘withdraw and return’ narrative has a great deal of potency.

**Another prominent commentator defended Durant from criticism levied by Oklahoma Thunder ownership about disloyalty to his team.  He rightly pointed out that this same owner moved his team from Seattle to Oklahoma City.  How dare he talk about loyalty to a particular place?

On paper he is entirely correct.  What the commentator failed to note, however, is that we don’t care about owners.  They are faceless, amorphous, rich men.  We don’t seek to worship owners, whereas we do seek this with certain players.  Hence, the reason for the so-called double-standard.