I find the trend in modern history books to use BCE (Before Common Era) and CE (Common Era) quite amusing.  Clearly as a culture we have a profound unease with the Christian roots of our civilization.  Naturally, then, many take issue with dividing time around the Incarnation.  Obviously I disagree with such a stance, but it makes sense that people would want to order their world around their beliefs.  And yet, using BCE/CE seems such a laughable attempt at “kicking against the goads.”  “When is the ‘Common Era?'” one might ask.  “After the coming of Jesus,” is the only response. “What makes that era ‘Common?'” as opposed to other eras?”  I can’t fathom anything other than a shrug at that point.  One archaeologist stated, “Before the Common Era (B.C.E.) and the Common Era (C.E.), are exactly the same as B.C. and A.D. but have nothing to do with Christianity.”

If you’re going to abandon a Christian understanding of time, abandon it already.  It will make things clearer in the culture and one’s own mind as well. 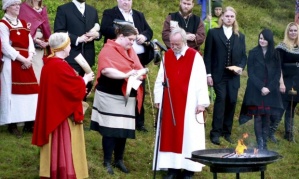 paganism in Iceland are building a temple to Thor.  For many decades now Christian understandings of nature, the human person, of sexuality, etc., etc. have steadily eroded, and been replaced in some ways by a neo-pagan revival.   If you actually build a temple, it communicates the reality that we are really worshipping something and calling a spade a spade.  Again, Jesus tells us that He prefers hot or cold people.  It’s all the lukewarm mush in our culture that makes things so difficult.

As I read a bit more, however, I discovered that they’re not going to sacrifice animals. Of course in many ways this is good news because, after all, no one wants to see animals sacrificed.  But in other ways . . .  the concept of sacrifice and propitiation, so crucial to Christianity, if taken seriously can lead one back to Christianity.  It is an example of the benefits of clarity.

And then Hilmar Örn Hilmarsson, high priest of Ásatrúarfélagiðadded, added, “I don’t believe anyone believes in a one-eyed man who is riding about on a horse with eight feet.  We see the stories as poetic metaphors and a manifestation of the forces of nature and human psychology.”

Ugh.  More mush, then.  Thor, I think, would not be pleased.