As I mentioned here, I believe that art reveals a great deal about a civilization.  This is decidedly not a radical concept, but I always enjoy coming across things that confirm that premise in one way or another.

We can trace Rome’s decline, I think in the sculptured busts over the centuries.  The faces say it all.

First, the hard-bitten men of the Republic, Cato the Elder, and Scipio Africanus Major, ca. 200 B.C. You may not have liked them, but you would have respected them: 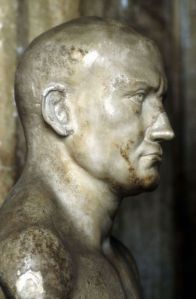 Then, Julius Caesar, ca. 50 B.C. — the expression, the eyes, are different — hungrier. He seems part machine, part man, a shark on the prowl.  The basic humanity of Rome’s leaders begins to fade here.

Then Augustus, ca. 10 B.C. —  we see a clean break with the past.  He is an image, not a man.  Unlike his uncle, Augustus was hardly the military type, yet here he poses in military garb. On the right is the soft Emperor Domitian, ca. A.D. 90: 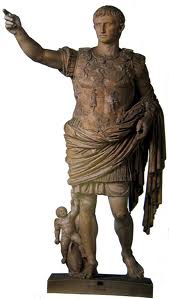 Fast forward and we get the pompous, detached Marcus Aurelius (ca. AD 165, below left), and his son Commodus (ca. AD 190, below right) who went native.  Aurelius’s stoic philosophy of detachment comes through every pore, and his admiration for the Greek style in his facial hair may signal that his mind lay elsewhere.  Commodus, dressed as Hercules, also gets caught up in this Greek sense of unreality.  Like father, like son.

Here we have a relatable man again for the first time in centuries, but we, and Philip too, know it’s too late.

The smug, satisfied look of Marcus Aurelius has got to be the worst of them all.  Similar perhaps to this guy?

Yes, I know that Robespierre was really wicked while Aurelius was merely insufferable.  But still. . .