As a juior-high and high school student I had always enjoyed history.  But by the time I attended college I had developed an exhaustion with the American story.  How this happened I don’t really remember, but I assume it had to do with a constant repetition of familiar themes.  In college my European/World History teacher had a more dynamic and engaging lecture style than my American History teacher, and he found me perfectly willing to focus on something else, anything else, other than  yet another rehash of the American Revolution and the Civil War.

Some years ago I realized my need to get reintroduced to our own tradition and have been very glad to find authors like James McPherson and Bernard Bailyn.  Neither are “revisionist” in their approach, but both give a freshness to familiar ground that has made American History intriguing for me again.

Bailyn’s The Ideological Origins of the American Revolution is his most famous work, and justly 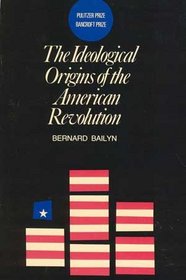 so.  Most treatments of this period focus on the legal case for and against the colonists, but Bailyn focuses on the psychological as well as the ideological aspects of the revolutionary’s thought.  I thought his keenest insight revolved around the psychological perceptions of the colonists. Revolutionary pamphlets focus far more on the state of liberty in general, rather than the particular musings of say, John Locke.  In short, the colonists believed that “Liberty” itself was in danger, and that given England’s failings, it had fallen to them alone to defend it.  This helps us understand why the Declaration of Independence did not focus on “American” or “British” rights, but “self-evident” human rights.

“Liberty” for the colonists was inherently passive, in need of a defender.  Hence the moniker, “Lady Liberty.”   Liberty needed careful cultivation, whereas power grew naturally like a weed.  “Power” had an inherent aggressiveness for the colonists that needed constant vigilance to hold at bay.  This attitude of the colonists made them inherently suspicious of the British, who seemed far too cavalier in their approach to liberty.  This alarmed many colonists, for Britain alone in the world seemed to stand for liberty.  As one colonist wrote in a charged tract, liberty had been reduced in the world to “skulking in dusty corners,” and would cease to exist at all if the colonists did nothing.  Bailyn believes that this attitude, more than Locke or Montesquieu, had the most influence in bringing about the Revolution.  This belief sounds a bit paranoid today, but outside of England no democratic state existed in Europe.  And with George III’s desire to make his stamp on England, even the stalwart British parliament seemed to suffer.  Observers of the political scene from America also had the same reaction as the British painter Hogarth, who lambasted the politics of his age.  Frontier American idealists could never stomach the crassness of an older, more cynical and tired political machine. 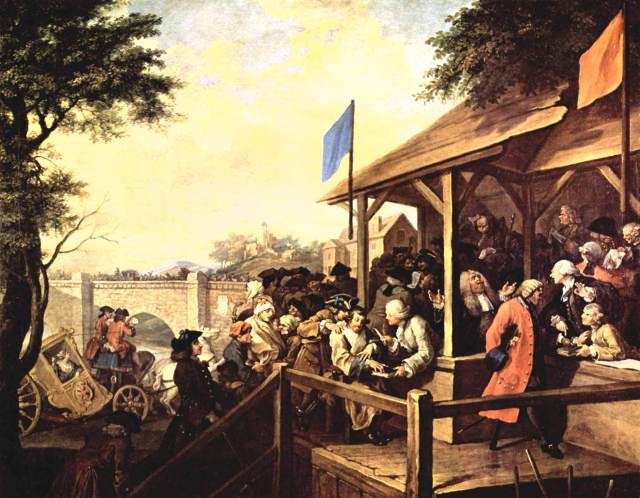 I do wonder what I would have thought had I lived in those times.  I believe the colonists were technically correct about the immediate questions of taxation and self-government that divided them and the British, and assume I would have thought so then.  But the British could hardly be described as cruel oppressors or outrageous occupiers.  I can see myself not understanding why legal trump cards warranted a bloody and uncertain war.  Maybe sharing their belief about the imperiled state of liberty might have changed my mind, but I have my doubts.

You need such passion to make revolutions, but this passion is also the Catch-22 of nearly every change of government.  That the American revolution stabilized itself relatively quickly with only  (relatively) minor political fall-out still distinguishes it from the French, Russian, and most every other revolution.  James Madison’s notes on the Constitutional Convention give us one key to why this happened.  In the tense and uncertain aftermath of their independence they managed to fairly discuss big and small picture questions with insight and humor.  Some of this “fairness” led to the tragic “3/5 Compromise” and doomed us to deal with the slavery issue at much greater cost later.  But all in all, it makes for instructive and even entertaining reading today.

The Federalist Papers have the good sense and clarity of the Convention debates, but not the entertainment value.  What makes the Anti-Federalist papers more enjoyable than their counterparts is that their objections to the Constitution reveal a keen understanding of the consequences of the Constitution for the country, which we take for granted living 200 years on the other side of their decisions.  They could see, for example, that the Constitution would mean an increased federal government and a diminished role for the states.  They accurately prophesied the results of giving the president full powers as commander-in-chief.  I don’t think we should view the Federalists as “right” and the Anti-Federalists as “wrong” or vice-versa.  Both sides were “right” in the sense that they had an accurate appraisal of the impact of accepting the Constitution. Both sides viewed liberty in much the same way, but Federalists saw a stronger national government built on the foundation of “the people” as bulwark to liberty, and the Anti-Federalists disagreed.

So why did the “Anti-Federalists” fail?  Among other things, they lacked the clarity and focus of Madison and Hamilton’s writing. But this may have been inevitable because they never had time to organize or communicate as the Federalists did.   No doubt this caused resentment and frustration.  Not all issues got perfectly resolved, and this must have impacted the causes of the Civil War.  With prescience, some Anti-Federalists strongly objected to the allowances for slavery made by the Constitution, and believed that the presence of slavery would doom the cause of liberty and the new Republic.  But on the flip side, wouldn’t we need a strong national government to remove slavery in the various states?

If nothing else, it is refreshing to see that the dilemma’s we face today have a precedent in our past.  To paraphrase Jacques Maritain, we must know our tradition that we might fight against it, and thereby renew it for each subsequent generation.