Ernest Hemingway once commented that American literature did not really begin until Twain’s Huckleberry Finn.  Anyone who has suffered through Cooper and the wearisome Hawthorne in an American Literature class knows that making it to Twain means finding cool water in a desert.

As you can see, I don’t like early American literature, but in truth those authors had little chance of success.  Coming to a new place with a new population meant developing a new language and a new sensibility.  Without a defined context, and without feeling comfortable in the language, awkward first steps cannot be avoided in such situations.

I thought of Hemingway’s insight when I dipped into Adventures at Sea in the Great Age of Sail, a collection of 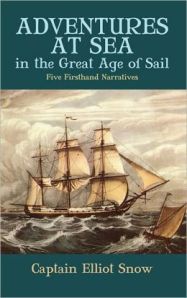 firsthand accounts from sailors in the early 19th century.  An American named Charles Barnard starts the book off.  He had extraordinary experiences, which involved him rescuing sailors, being abandoned, and then later getting rescued himself.  But for some reason he begins his amazing story this way:

The brig Nanina, of one hundred and thirty two tons burthen, Charles H. Barnard, master, sailed from New York the 6th of April, 1812 on a sailing voyage to the Falkland Islands.  She was owned by John B. Murray & Son of New York and was completely fitted and also carried the frame of a shallop of twenty tons intended for use among the islands.

Barnard means well, and writes with all the earnestness of the young American republic.  Alas, the heavy, clumsy style betrays a man without a fully formed country and heritage.  This lack of style makes his incredible story somehow boring.

The second narrative came direct from the pen of Scotsman John Nicol.  The physical details of his life can’t equal Barnard’s, but Nicol writes with the ease of someone who has long lived within a language.  He opens with,

Having reached the age of 67 years, when I can no longer sail upon discovery, and weak and stiff, can only send my prayers with the tight ship and her merry hearts, at the earnest solicitation of friends I have here set down an account of my life at sea.  Twice I circumnavigated the globe; three times I was in China; twice in Egypt; and more than once sailed along the whole land-board of America, from Nootka Sound to Cape Horn and twice I doubled it.

I don’t blame Barnard.  We often don’t realize how long it takes not just for a culture to form, but for a people to feel comfortable enough within it to develop their own literary style.