I picked up Byron Farwell’s Armies of the Raj on a whim, and was very pleasantly surprised.  From the title one might think this book has a very narrow focus, but this is not so.  Farwell uses the army as a springboard into England itself and the whole Victorian era.  Cultures come in many parts, but each diffracted part contains the whole, like light through a prism. So, while this book is military history, it is really cultural history disguised as military history, which I appreciate.

Many have made the point that Victorian era nations really worshipped themselves, and one certainly sees this confirmed by Farwell.  Part of this might have resulted from those India being away from the home country.  Perhaps they felt the need to overcompensate and out-English those in England itself.  I suppose this ‘diaspora’ psychology is not common to the English.  David Hackett-Fischer touched on this same psychology in his wonderful examination of New Zealand and America, both settled by Brits. This might not have been a problem, were it not for the over-inflated view of themselves the Victorians possessed. Toynbee comments,

The estrangement between India and a western world which, for India, has been represented by Great Britain, goes back behind the beginning of the Indian movement for independence in the eighteen- nineties, and behind the tragic conflict in 1857. It goes back to the reforms in the British administration in India that were started in the seventeen-eighties. This birth of estrangement from reform in the relations between Indians and English people is one of the ironies of history; and yet there is a genuine inner connection between the two events. In the eighteenth century the then newly installed British rulers of India were free and easy with their newly acquired Indian subjects in two senses. They were unscrupulous in using their political power to fleece and oppress them, and at the same time they were uninhibited in their social relations with them. They hob-nobbed with their Indian subjects off duty, besides meeting them at work on less agreeable terms. The more intellectual Englishmen in India in the eighteenth century enjoyed the game of capping Persian verses with Indian colleagues; the more lively Indians enjoyed being initiated into English sports. Look at Zoffany’s picture ‘Colonel Mordaunt’s Cock Match at Lucknow’, painted in 1786. . .

It tells you at a glance that, at that date, Indians and Englishmen could be hail-fellow-well met with one another. The British rulers of India in the first generation behaved, in fact, very much as their Hindu and Moslem predecessors had behaved. They were humanly corrupt and therefore not inhumanly aloof; and the British reformers of British rule, who were rightly determined to stamp out the corruption and who were notably successful in this difficult undertaking, deliberately stamped out the familiarity as well, because they held that the British could not be induced to be superhumanly upright and just in their dealings with their Indian subjects without being made to feel and behave as if they were tin gods set on pedestals high and dry above those Indian human beings down below.

Exhibit B for Toynbee’s analysis might be this painting done of Queen Victoria’s visit to the “Jewel in the Crown”. . . 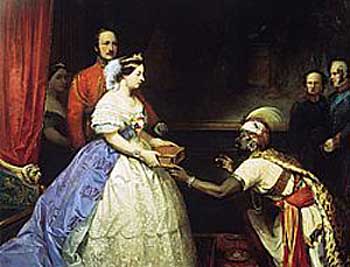 What can account for this shift, and how did it express itself?

One obvious reason was the Suez Canal, which made transportation to India quicker and safer.  This opened up the possibility of women and families traveling to India, which meant the end of India as a playground for English businessmen, and the arrival of more civilizing influences.  But if one looks at how Victorians dressed, one sees that their version of a “civilized” world was in effect a closed system.  They would not be able to fully reach out to Indians.  Even their clothes seem to send a message of, “Back!  Back, I say!” 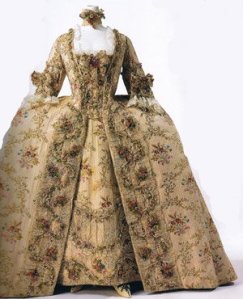 Before slamming the British completely, Farwell argues (and I agree) that many if not most British had a sincere desire to do good in India.  And they did in fact accomplish a variety of good things.  As to whether or not the good outweighed the bad in the end, Farwell doesn’t say, and I would think it’s too soon to tell for sure.  He puts his focus on how  the British reformed the military after the Sepoy Rebellion of 1857, and how their innate prejudice kept getting in the way in a few key areas:

As time went on the British changed some of their attitudes and tried harder to treat Indians equally. Yet rarely could they go all they way.  Some officers clubs for example, came to allow Indian officers to the bar and billiard room, but not the “swimming bath,” as they called it (though some British officers refused to allow their troops to join if their Indian officers were not granted full membership).  When W.W. II came the British worked hard to recruit all the Indians they could, and the army served to break down a variety of social barriers between British and Indians, and between Indians themselves.  Yet when it came to actually declaring war, the British government announced that India was at war with Germany without even consulting the Indian National Congress, a foolish act that led to much violence and a tragic split between Moslems and Hindu’s within the Congress itself.  General Auchinleck commented in 1940 that,

In my opinion we have been playing a losing hand from the start in this matter of “Indianization.”  The Indian has always thought, rightly or wrongly, that we never intended this scheme to succeed and expected it to fail.  Colour was lent to this view by the way in which each new step had to be wrested from us, instead of being freely given.  Now that we have given a lot we get no credit because there was little grace in our giving.

In their foibles, the British are hardly alone.  Empires find it very difficult psychologically to fully open up themselves.  They tend to believe that the locals should be thankful, first and foremost, for the blessings they bring.  They want to be seen as benefactors.  At their worst, they insist that those they rule thank them for their kindness, and get angry if others fail to do so. . .

The book is another confirmation about how nations cannot do things halfway.  You cannot bring part of your civilization and trust that it will satisfy.  If you rule on the basis of the superiority of your civilization and claim to bring its blessings, you have to bring them all.  England could claim that they brought more economic opportunity to India, as well as modernization.  These are features of western culture.  But many of the Indians the British generously sent to Oxford and Cambridge (like Ghandi and Nehru) learned that there was more to western culture than railroads.  Others principles, like equality under the law and self-determination will be evident in a western education.  That the British did not see this coming testifies to their short sight, but again, their problems were human problems, and hardly uniquely their own.  In a fallen world, we often don’t recognize what’s best for ourselves, let alone others.