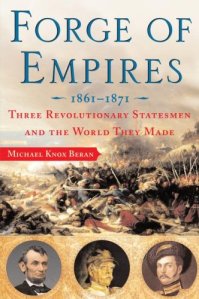 Beran’s book looks at Abraham Lincoln, Otto von Bismarck, and Alexander II, three contemporary heads of state who remade their respective countries.  Beran attaches the word “revolutionaries” to each of these rulers, though not all revolutionaries are created equal.

One can read this book even if you’re only interested in one or two of the people, as I was.  I thought his comparison of Bismarck and Lincoln refreshing.  Historian James McPherson called the Civil War a “Second American Revolution,” and I think Beran would agree.  If we think about the Civil War like this it puts a new perspective on Lincoln’s presidency.

To my mind the Confederacy acted much like the British did in the late 18th century.  I think the British had technical legality on their side, but to focus on that alone missed the most important details.  They were right, for example, to insist that the colonies never had a separate existence apart from England, like say, Ireland did until it was incorporated into the British empire.  But though correct in the barest factual sense, England overlooked the reality that American had de facto operated independently in almost every way since the 17th century.  While some townships in England had no direct Parliamentary representative (and so the colonists shouldn’t feel it their absolute right to have one), England ignored the great differences between an English township and colonies across the ocean.

So too the Confederacy may have been technically correct about federal power as it related to the slavery question.  But as one student of mine said, “It’s slavery, who cares about the Constitution.”  Anti-slavery advocates called for the country to be guided by a “higher law” than the Constitution.  When the southern states objected to this idea, they immediately lost the real argument.  They put the Constitution itself, which they claimed to follow, in the perilous ground of complete irrelevancy.  If it could not solve the slavery issue, what good was it?

By 1861 the Constitution had proved inadequate to deal with fundamental questions of human existence.  So yes, Lincoln did skirt some constitutional guidelines.  But he must be understood in a revolutionary context.  Revolutions happen in part because the current system fails to deal with reality.  Revolutionaries often find themselves cast off from traditional moorings because the tradition’s failure led to the revolution in the first place.  Revolutionary movements therefore have great opportunity and immense danger inherent in them.  So yes, Lincoln did play fast and loose with certain constitutional provisions (as did Jefferson Davis in the South).  But we should marvel at how much he preserved, rather than what he bent or broke.  The Civil War did change America, but I would argue that it was Lincoln’s moral sense, and a Christian moral sense from around 1862 on, that preserved much of the best of what the founders bequeathed.

Bismarck, like Lincoln, was a brilliant politician who forged a nation from a confederacy of provinces.  But that is where the similarities end.   He manipulated other countries and even his own king.  He cared enough about democracy and constitutionalism to use it when it suited him, but he always came back to force, his weapon of choice.  Bismarck was in certain key ways a friend of the Jews, and so I very much want to believe he would have hated Nazi rhetoric.  But his insistence on using force to bypass the democratic process bore terrible fruit generations later.

Most of their portraits reveal this basic difference.  Bismarck, for example often posed in military garb, which suits his whole political philosophy. 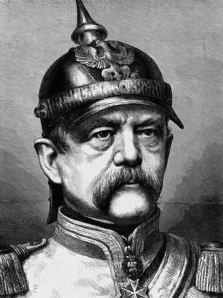 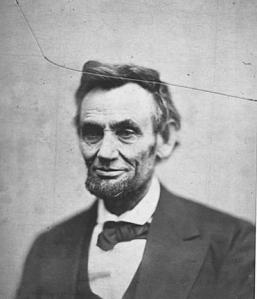