The full title of the book is Captain Bligh’s Portable Nightmare: From the Bounty to Safety — 4,162 Miles Across the Pacific in a Rowing Boat.

With such a title, the author John Toohey borrowed from the dense Enlightenment style from the period he chronicles.  The original title of Bligh’s own book was The Narrative of the Mutiny aboard His Majesty’s Ship ‘Bounty;’ And the Subsequent Voyage of Part of the Crew, in the Ship’s Boat.

Bligh’s mentor and hero Captain Cook wrote one entitiled, The Voyages of Captain Cook Round the World: Illustrated with Numerous Engravings on Wood and Steel.

Toohey writes well and tells a remarkable story, making some inspired guesswork about what happened on the launch and how they possibly could have traveled so far and survived.  Put Bligh’s accomplishment in the long list of things perhaps no one on Earth could do today.  To be fair to us, Bligh may have been one of the few of his time that could have done it as well. 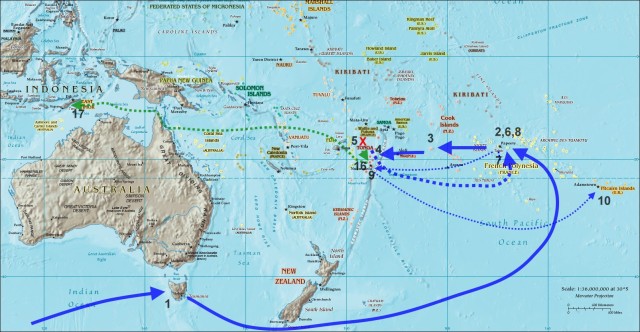 The book grabbed me for other reasons.  Bligh represents much of his time.  In Bligh we have a man of incredible mathematical and navigational gifts.  But the journey required a great amount of indescribable “feel” as well as inspired guesswork honed by years of sailing by sun and stars.  Bligh’s abilities were innate to be sure but also honed by all the fruits that the Scientific Revolution and Enlightenment had to offer.

But it’s the long titles of all those 18th century books that bothers me.  Those titles seem so earnest and so dedicated, just like the men themselves.  But their style can be so heavy and didactic that all life gets sucked out of them.  In the same way, some of the era’s  great men like Bligh seem out of touch not just with the universe itself but with each other.  Even while in the rowboat fighting for the life of the crew, Bligh managed to make these impressive maps of surrounding islands that later sailors would use themselves and declare accurate:

But when one the men on the launch died in a Dutch settlement, Bligh did not even know if the deceased had family to notify.  He could save the lives of his men without relating to them as human beings.  Bligh’s tragic resentment towards his men whom he believed did not sufficiently appreciate him shows him to be all to human indeed.

And now as a postscript, being for the edification of Ladies and Gentlemen alike, for the purpose of reinforcing the bloggist’s aforementioned point concerning the titles of books in the said era under discussion. . .

Some other titles of 18th century books:

An Introduction to the Italian Language Containing specimens both of prose and verse … with a literal translation and grammatical notes, for the use of those who, being already acquainted with grammar, attempt to learn it without a master …   By Samuel Johnson

The New England Almanac, or, Lady’s and Gentlemen’s diary, for the year of our Lord Christ 1775, calculated for the meridian of Providence, New England,  lat. 41° 51′ n. and 71° 16′ w. from the Royal Observatory at Greenwich; but may serve all the adjacent provinces.  By Benjamin West