This week we focused on The Persian Wars, a conflict that historians claim marks a transition point between Eastern and Western dominance.  Persia staked a lot of their invasion, and their failure would lead to the rise of Greece in general, and Athens in particular.  Our main focus Thursday and Friday lay with  the Battle of Salamis, one of the more crucial naval engagements of the ancient world.  As I mentioned back in September, one of the things we focus on this year and throughout the history curriculum is how to make choices.  This can be applied in a  variety of different settings, and this week I wanted the students to consider that on the level of strategy and tactics.

The Persian fleet was bigger, with a variety of incorporated Greek city-states that had surrendered to Persia.  Ionians, Phonecians, Egyptians and more went into the mixture.  In general, their ships were lighter and faster.  Athens controlled the Greek fleet, and in general they had heavier, bulkier ships.  But the weight of the ships did perhaps produce an innovation, that of a ramming prow.  This in turn, led to a change in how the Athenians fought.  Whereas most ancient navies wanted to get close and board other ships, the Athenians wanted to use their prow to ram other ships and sink them with a broadside charge.The Persians had sacked Athens, and the Athenians in desperation abandoned their city, got in their boats, and headed for the island of Salamis.

I enjoyed the student responses to this question, and most of them did get around to seeing that 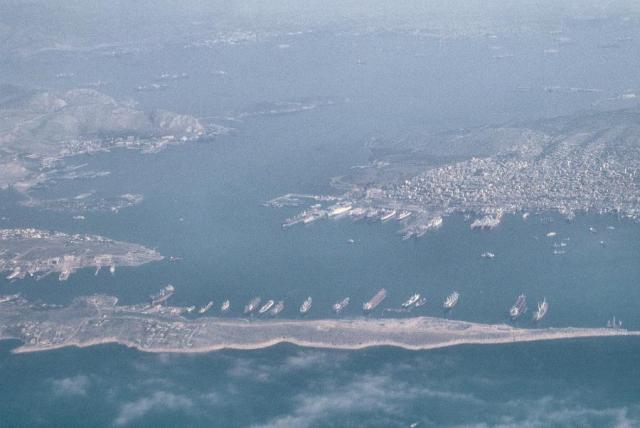 The Athenians needed a battle.  The Persians did not.  With Athens abandoned they could have simply occupied the city, and hemmed in the fleet at Salamis.  If they wait eventually a tired and bedraggled fleet would have to come out of hiding and face the Persians on their terms.  Fighting in the bay itself would mean narrower corridors where the Persians could not use their numbers and speed to their full effect.  Think of a heavier boxer vs. a lighter, quicker opponent.  The heavier one (Athens) seeks to trap or corner the other to take away his advantage.  By fighting in the bay, the Persian fleet gave up much of its advantage.
Again, with so many of our choices there are no guarantees.  We must weigh the options and make our best guess. But it is important not to choose blindly.  So why then, did the Persians attack the Greeks?Here we are back, at least possibly, to the personality of Xerxes.   We saw that both Herodotus and the Book of Esther show us a king who was not wicked, but perhaps indolent, and someone who tended to flit from one thing to another.  Note that Esther 1 begins by describing lavish parties amidst opulent splendor. Herodotus mentions that Xerxes wanted the invasion over as soon as possible.  Ideally, of course, the Persians should have bottled up the fleet, entrenched themselves in the city, and watch Athens suffocate to death.  When Themistocles sent a messenger to lie to the Persians about the disorder in the Greek ranks, the Persians jumped at the chance and moved into the bay to attack.  Xerxes seems a suggestible, impatient type.  “Let’s get this over with. . .”  The result was a complete victory for the Greeks.  It turned the tide of the whole Persian invasion.  Having been smacked on the nose, Xerxes decided enough was enough.  He withdrew most of his navy from the region.  His infantry at current levels could not live off the land in Greece, and besides, winter approached.  Without the navy to supply them, Xerxes withdrew a good portion of his troops back to Persia.  The Battle of Platea in 479 BC would, for all intents and purposes, finish them off.

Clausewitz used the term “center of gravity” to describe what one colonel described as a “factor of balance” in a campaign.  This does not have to be something purely physical, but in this case, the “factor of balance” in the Persian Wars would surely include control of the sea.  In invading Greece en masse as they did, Persia made naval superiority a key to the campaign.  But for about 75 years prior to this they concentrated their strength on their infantry.  They did not play to their strength. But we might also conclude that the whims of Xerxes would constitute part of the “center of gravity.”  The Book of Esther gives us clues.  Note how casually he decides on the Jews destruction, and how quickly he reverses course.  Of course, it’s good that he changed his mind!  My point, however, is that Xerxes never seemed fitted for the role of a noble kingly persona.  He would much rather not be bothered.  In every conflict, the hidden factor can often be each combatant’s internal political system.  In this case, the nascent democracy of Athens had an advantage over the indolent monarchy of Persia.