This week we spent time with two maps, each respective of their time, each revealing much about the societies that created it.

First, the Hereford Mappa Mundi (Map of the World), from the late 13th century : 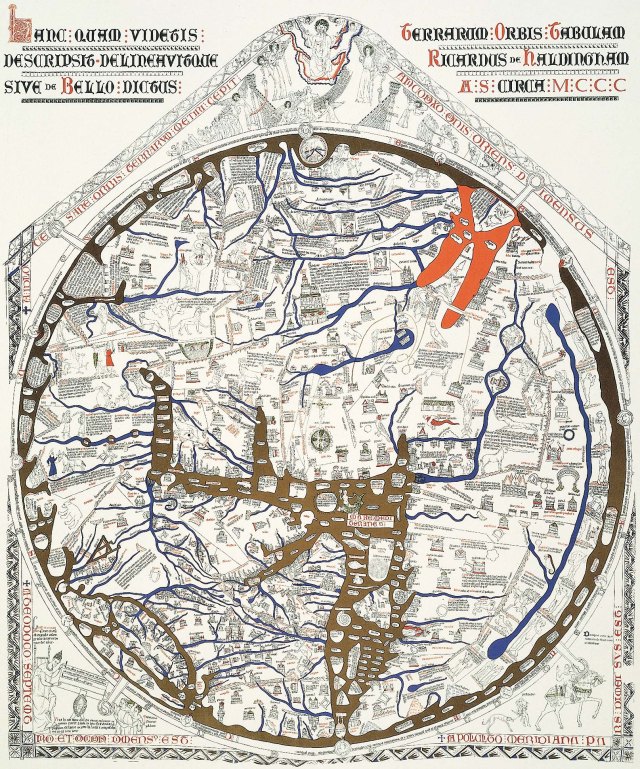 We noted that, among other things

Basically the Hereford Mappa Mundi does not attempt to a map in any modern sense of the world.  It tells you nothing about physical geography.  But it does mean to orient one spiritually.  Christ sits enthroned above, the word “MORS” (Latin for death) forms a ring around the sphere, reminding us that death encompasses the globe.  Jerusalem stands at the center to remind us of the centrality of Christ’s death and resurrection.

Did they know nothing of physical geography.  Well, they may not have known much, but they knew more than this map indicates.  I think they just did not particularly care about it, it had no real importance in their society, and other Mappa Mundi’s of the era reflect the same values.

Obviously many differences exist between the two.

The map is intended to represent physical reality, to perhaps guide one (at least marginally) while physically traveling.

Of course the map could have had spiritual symbolism if it wanted to.  But it had other purposes and goals in mind, and reflected the different values of the period, and this brings us to one of the crucial differences between the feudal period and the Renaissance.

For the Medievals, what counted most was not the actual, physical person/place/thing as it existed in reality, but the meaning behind the physical, or the symbolism inherent in the object.  So when they want to make a map of the world they did not really make a map of the world, but a spiritual map, a gospel tract.  When Dante uses Beatrice in his Divine Comedy, his treatment of her is not as a particular historical person, but as a type of how the feminine can lead one to salvation.

During the Renaissance we begin to see a shift in the other direction.  The physical world in itself has value, and is worth investigating and depicting.  I think both perspectives have value, and neither one has much value apart from the other.  Neither a peanut-butter sandwich, or a jelly sandwich, satisfies, but combined it works beautifully.  The Renaissance began by offering a helpful balance or corrective to some weak spots of the medieval order.  Whether it finishes there or not, we shall see.

If you have interest, last week we watched a brief portion of a video on the development of perspective in art which I include below.   Medieval art did not use perspective, partly because they did not know of the technique.  But I think that part of the reason why they did not discover perspective is that they never looked to develop an artistic technique that would allow them to represent the physical world accurately.  The reasons why for this are complicated.  If you want an atypical medieval ‘apologetic’ for their style contra the ‘modern’ ideas of the Renaissance, you can check out this article.

Have a great weekend!