I have written before that I think the best historians are always part-time philosophers and theologians.  For events to have meaning, they can’t just “be,” they need a context.  If we have no interpretive framework, we have no meaning.

Eric Voegelin may not be a historian by some definitions, but he certainly qualifies as a 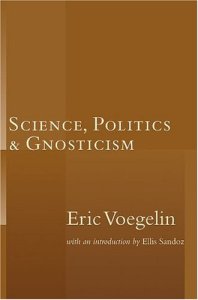 philosopher/theologian.  His short pamphlet Science, Politics, and Gnosticism gives the reader a lot to digest, and provides a framework for understanding modern political movements.

First he gives his working definition of “Gnosticism.”  At root, gnostics believe that “God,” the “Demiurge,” or whatever goodness that exists had nothing to do with the creation of the physical world.  The world in fact separates us from true goodness, and to “get back” to our original, pure, and spiritual state we must somehow escape creation and its ill effects.  Of course, only a select few will have the will, but most importantly, the knowledge, (or the “gnosis”) to do this.  “Salvation” comes only for the “inner man.”

Every political philosopher must decide what to do with creation.  Should we seek to accommodate ourselves to it, have dominion over it, or seek to transcend or abolish it altogether?  While these choices may not always come directly from our conscious selves, we make these choices in one way or another.  Voegelin shows that even so-called “materialistic” ideologies like Marxism and Nazism have strong gnostic roots.

On the surface at least, Marxism appears to be all about this world.  It has a “materialistic” cause for the changes in history (economics and class struggle). It argues for an abolition of traditional religion.  It seems to preach an earthly utopia of sorts.  Nazism also focused on racial purity.  Hitler wanted a 1000 year Reich on earth.  He wanted to transform the world politically and aesthetically.  But Voegelin helps us look behind the mask.

To take an “anti-science” stance is to take a stand fundamentally against the created order.  Part of our humanity is the desire to grow in wisdom and understanding, to seek, to knock.  (Lk. 2:52, Mt. 7:7).  Science itself demands a continual re-evaluation of even its basic principles.  But Marxism, along with all totalitarian societies, demands an end to questioning.  Voegelin quotes Marx,

When you inquire about the nature of creation and man, you abstract nature and man.  Give up your abstraction and you will give up your questions along with it.  For socialist man, [such a question] becomes a practical impossibility.

Thus, in denying the right to questions, the supposedly scientific basis of Marxism breaks down.

Many focus on Marx’s view of class warfare and an oppressive industrial capitalism–more “material” factors.  He and other devotees expected the Revolution to start in England or Germany, where such political and economic systems had developed farthest.  But the fact that it started in Russia, the most religious country in Europe at the time, strongly testifies to the religious roots of communist ideology.  “History” for Marx was nothing but a mistake.  Humanity’s experience in and with creation offered nothing but a universal negative of oppression.  Again we see this desire to break free from the created order, to transcend it, rather than transform it.

Gnosticism had appeal mainly to the intellectual elite of late antiquity, possibly because it told the elite what they wanted to hear.  “This knowledge is not available to all, or easy to see or understand.  How clever of you to have found it!”  Gnostic religions create a distance between the elite and the rest of humanity, with the “knowledgeable” able to dictate to the rest of us.  However much Marx may have hoped for a people’s dictatorship, the movement never got past the party-elite enjoying privileges they specifically denied the people themselves.  If Voegelin is right, communists movements never could have advanced beyond this because of their essential gnostic roots.

For Nazism (Communism and Nazism formed the immediate context of Voegelin’s writing in the early 1950’s) some of the same truths emerge.  They claimed a “scientific” basis for much of their theories involving race.  But in the end their totalitarian society naturally denied individual freedoms, but also desired escape from creation through death.  Whether through Hitler’s obsession with Wagner, the killing-squads of the SS, or blitzkrieg, itself, I think more than enough evidence exists to see the Nazi hatred for creation.  For them as well, redemption can only come via escape from creation.

All this offers more evidence for the historian to see economics, politics, etc. as downstream from religious ideology.