I posted this originally back in 2012.  While I could have added some new thoughts to the post I wrote directly on Eric Voegelin’s Science Politics, and Gnosticism (found here), I thought it better to include in this post as a sub-set on the idea of territorial expansion.

It may very well be that to read Eric Voegelin is to be confused.  I have had my struggles with his book Order and History: The Ecumenic Age.  But, remembering that he made a special study of gnostic ideas and philosophy, I found his thoughts on the origins of Gnosticism and its relation to territorial expansion very intriguing.

Gnosticism has many permutations, but at its core it propounds an opposition of matter and spirit, the soul and the body, and so on.  Some biblical scholars believe that the Apostle John may be attempting to counter Gnosticism in his epistles. Those who have read St. Augustine’s Confessions know that he involved himself in the gnostic ideas of Manicheism before converting to Christianity.  But gnosticism as a general philosophy pre-dates the coming of Christ by many centuries. Voegelin writes on its origins,

The genetic context to which I refer is the interaction between expansion of empire and differentiation of consciousness.  In pragmatic history, Gnosticism arises from six centuries of imperial expansion and civilizational destruction (p. 21).

Thus, we may assume that gnostic ideas had their roots in the first great ecumenic empire of the Persians, and this fits with the Zoroastrianism and its adoption by Darius I as the semi-official religion of his court.

As to the “why” behind the link between expansion and Gnosticism, I am less able to penetrate Voegelin’s thoughts.  But I believe that we can surmise the following:

Related to the original post below, the disconnect from creation might form the spiritual basis of the problems faced by expansion.

Having recently glanced over The Goebbels Diaries I wondered —  did Hitler’s refusal to allow Rommel to withdraw at El Alamein, and his “fight to the last bullet” order to Von Paulus at Stalingrad arise not from hope of victory but desire for the extinguishing of matter?  As Germany’s territory increased, Hitler seemed more focused on a “refining” cataclysm for creation than in actual victory.  Once separated from creation, we come to hate it, with death as the (perceived) only escape.

Reading Explorers of the Nile spurred on a thought experiment.

While I have not been overly compelled by the story, there have been several interesting tidbits.  Regardless of one’s feelings toward the Victorian age in general, or the Brits in particular, one can’t help but admire the sheer will and energy of the seco

nd great wave of western exploration (the first being in the 15th-early 16th centuries via the Atlantic).  Many hundreds of men risked everything for the sheer thrill of discovery, and yes, for the glory of it as well.  In the early phases from ca. 1840-1860’s, most of this exploration seemed to me to have a generally innocent tinge to it.  The more acquisitive imperialism came later.

This energy and striving for glory reminded me of late Republic Rome, and the quote from Sallust in The Jurgurthine War, which reads,

I have often heard that Quintus Maximus Publius Scipio, and other distinguished men of our country were accustomed to declare that, whenever they looked on the masks of their ancestors, their hearts were set aflame in the pursuit of virtue [i.e. worthy deeds].  Of course they did not mean that the wax or the effigy had any power over them, but it is the memory of great achievements that kindles a flame in the breasts of eminent men that cannot be extinguished until their own excellence has come to rival the reputation and glory of their forefathers.

It struck me that it was during the later phase of the Republic that Rome grew the most in size.  If we look at a map of the Mediterranean at the beginning of the first Punic War in 264 B.C. . . .

we see that Rome, though decent in size, does not dominate.  They have their sphere, along with Carthage, Egypt, Macedon, etc.

If we fast-forward 100 years we get a different picture, and as the map below indicates, Rome continues to grow almost geometrically down to the death of Caesar in 44 B.C.

While Rome had a Republic at this time, I agree with Toynbee that while the government had democratic elements, it was for all intents and purposes an oligarchy.  The aristocratic senate dominated policy, however much voting by the masses took place.

Is there a connection then, between oligarchic democracies and expansion?  As time marched on from Charles I, England did by fits and starts become more democratic.  But 19th century England surely was not democracy in our sense of the word, and instead like the Republic showed strong oligarchic tinges.  As a monarchy, England’s overseas holdings were modest compared with the rest of the world, ca. 1800. . .

But a century later, after more democracy (while still having an oligarchy) and we see a different scene: 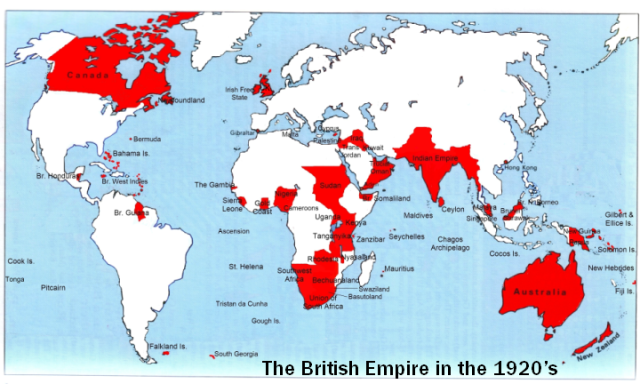 As in late Republic in Rome, we have a near doubling in size.  Of course, something similar could be said of the other major European powers during the same time, many of them become more democratic after 1848, though again, like England, not fully so until after W.W. I.

Two examples do not really suffice to prove the connection.  But three will!

America gets accused of being an imperial power, but I think the charge false in our current, strongly democratic time.  It might have had more merit in the more oligarchic 19th century, however.

When America became more democratic in the 20th century, our expansion rapidly slowed.  Now, to be fair, we acquired Louisiana “fairly” from France by buying it, and Alaska fair and square from Russia.  But the same cannot be said for the Philippines, or the vast territory taken from Indians, including territory in Louisiana.  Both Abraham Lincoln and Ulysses S. Grant thought that our war with Mexico in 1846 to be manifestly unjust.

If we believe Thucydides, and call Athenian democracy in its golden age really a Pericles-led oligarchy of the best (a claim, to be fair, disputed by the great classicist Donald Kagan), we again see this principle of growth.  In 490 B.C. Athens stood as one city-state among many.  Not so 50 years later. . . 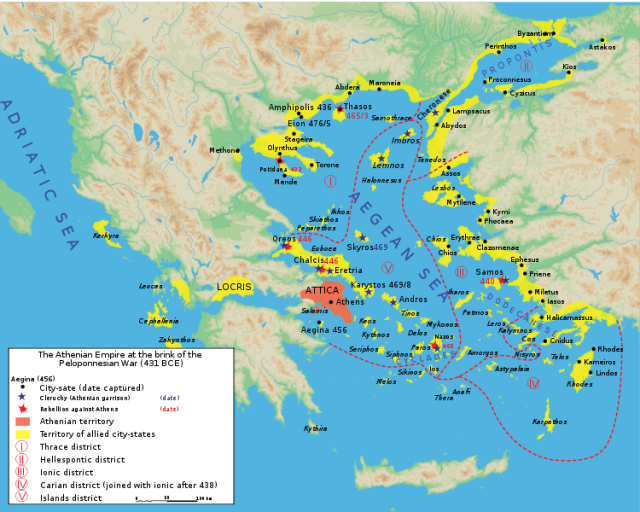 As to why oligarchic democracies have such expansionistic tendencies, I cannot say.  Perhaps it can be the subject of another post filled with wild theories.  But it does seem clear that this period of expansion leads to a “Time of Troubles,” for all parties involved.

For England and the rest of Europe, expansion gave way to the two World Wars.  America had its Civil War, caused largely by the exacerbation of the slavery issue.  The inflaming of the slavery question in its turn had its roots in the Mexican-American war in 1846.  Athens and the Greek world faced the Peloponnesian War (431-404 B.C.).  Though the proximate causes and results of these conflicts differ, they each have an age of expansion to precede it.

Any thoughts from anyone else, with more examples, or a connection between oligarchic democracies and expansion, are heartily welcome.

One comment on “Oligarchies, Expansion, and a “Time of Troubles””