(The Grumpy Old Man podcast that touches on some of these themes can be found here.).

A few years ago at the Circe Institute conference Andrew Kern made a startling statement.  In the midst of his opening speech he mentioned the Luddites.  I have always assumed (like most of us I suppose) that the Luddites attacked the mechanical looms for economic reasons.  But Kern suggested that perhaps the Luddites acted unknowingly for more fundamental reasons.

All throughout ancient literature (which people in the early 19th century would be familiar with) weaving relates strongly to wisdom.  So Penelope’s weaving, for example, is not merely a clever device to stall the suitors.  She represents wisdom and faithfulness in contrast to the suitors who grasp for power and wealth.  They will not confirm Odysseus’ death, rather they will take what they want in defiance of the pattern of creation and marriage.  The idea of the “fabric of society” closely relates to weaving, and so on.

So, Kern surmised, the Luddites didn’t just act to try and preserve their jobs.  They may have acted to preserve the idea of wisdom itself, though almost certainly not overtly but in a sub-conscious, Jungian sense.

I thought the idea intriguing at the time, but perhaps a bit of a stretch.  But I started to look for weaving in ancient literature.  To my surprise Plato uses weaving in “The Statesmen” as an analogy for good government.  With Jason and his Argonauts we see Medea the sorceress contrasted with Queen Arete, who is weaving when we first meet her.  In Homer’s The Odyssey we see a couple of references to the span of life compared to a thread (7.197-198, 24.38-29).  Melville uses similar imagery in chapter 47 of Moby Dick, and we also see it in the Upanishads.  Isaiah 38:12 reads, “My life was with me as cloth on a loom, when she that weaves draws near to cut off the thread.”

The philosopher Porphyry uses very similar imagery in his On the Cave of the Nymphs, another reference to the Odyssey (13.102-112).  Here Homer refers to a murky cave which contains, among other things, “looms, likewise of stone, on which the nymphs wear weave sea-purple garments.”  Porphyry writes (and we should remember that he–unfortunately–believed in the pre-existence of the soul),

What symbol could be more appropriate than “looms” for souls descending to birth and the creation of the body?  , . . For flesh is formed in and around the bones, which in living beings resemble stones.

We should not miss the connections to the fundamental facts of weaving, birth, death, blood, and the like.

So perhaps Kern, and the Luddites themselves, were on to something.

I finally went in search of a book on the Luddites and came across Rebels Against the Future by Kirkpatrick Sale.  Sale 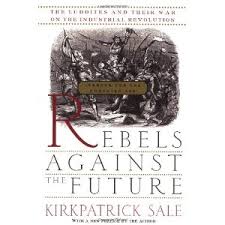 gives a good overview of the Luddites but does little else.  He gives us some important perspective, showing us that the Luddites had nothing against technology per se, but only against, to quote from a Luddite letter, “Machinery hurtful to commonality.”   He clearly favors the Luddite cause and shows many examples of their courage.  Sale’s explanation for the Luddites ultimate failure, however, leaves out to my mind the most basic reason.  In resorting to violence, they at times fired upon common men like themselves, and thus abandoned their moral high ground.  Furthermore, their use of violence played directly into the hands of their adversaries.  Once they broke the law, the state naturally would defend the men behind the machines.  And the state had much more force to use than the Luddites.*  Had the Luddites exercised more patience and used a non-violent, grass-roots approach, history might have been different.  As to how different, Sale offers no thoughts.  Did industrial looms pose more of a threat than factories that performed other tasks?  Would it be possible to industrialize in some areas and not others?  If other countries industrialized their economy, and thus, their armies, what would the consequences be for a non-industrial country?  The age of imperialism might offer some hints on this, and questions about community balanced with security (among other questions) should be asked.

Sale just scratches the surface.  Maybe not much else exists to see.  Maybe the Luddites had no higher purpose than saving their jobs.  But I think the Luddites continual references to “commonality” hints that Kern had more insight than I first supposed.  I will hope to find other books that can take the issue deeper.

My favorite part of Toynbee’s sixth volume of his A Study of History deals with his examination of what he calls archaism.  “Archaics” in his context seek to recover their civilization in a time of crisis by using a time-machine to travel back to some imagined golden age.  We should much prefer archaism to “futurism.”  The past has the advantage of having an actual reality and thus restrains action somewhat.  The futurist has no such limitations, and the evil they work in their earnest desperation will likely be much more terrible.  Toynbee points out that archaists would usually rather be archaeologists than politicians.  Alas, political realities set in and something must give.  The impossibility of drawing back the masses to the past with you means that archaists often choose violence in the end.  And this ends up dooming their movement.**

I think the Luddites use of violence contributed heavily to their defeat, but I would not call them “archaists.”  They sat on the knife-edge of change and saw a darkness on the horizon.  The “past” they tried to preserve was in fact the present.  Given that they did not reject all technology they had no wish to futilely put the brakes on all aspects of societal change.  They saw clearly what the Industrial Revolution would do to their communities and their sense of self.  If they did not submit to “archaism” they had more psychological flexibility at their disposal, which makes their use of violence more troubling to me.  Perhaps in the end they simply lacked the very rare traits necessary to translate those ideas politically.

Or perhaps their concerns went far away from politics.  Perhaps they saw themselves as doomed crusaders, but bound, like crusaders, to something deeper and older than politics.

According to the Tradition of the Church, at the Annunciation the Virgin Mary was found by Gabriel in the Temple . . . weaving a veil for the Temple where she resided, and some icons of the Annunciation (such as the one below from the 14th century in Serbia) show this as well.

In Hebrews 10:20 we see the identification with Christ’s body with the veil of the sanctuary (10:20), and we know that both the Temple curtain and the Body of Christ were broken for the life of the world.  Father Maximos Constas writes, “With the strictest visual economy, then, Mary’s thread gives consummate expression the . . . continuum of conception and crucifixion.”^

About Eve and Mary it was said, “Who gave women the wisdom of weaving, and the knowledge of embroidering? (Job 38:36).  For the first wise woman, Eve, wove material garments for Adam, whom she had stripped naked.  This labor was given to her, for it was through her that the knowledge of nakedness was acquired, and thus to her was given the task of clothing the perceptible body.

And from St. Nelios the Ascetic:

The Theotokos [that is, Mary, the “Mother of God”] displayed such “wisdom and manifold knowledge” (Job 38:36) that, from the wool of the Lamb who was born from her, she was able to clothe all the faithful with garments of incorruptibility.  For all true Christians stand at the right hand of the King, in golden-fringed garments, embroidered in myriad forms of the virtues.

So it may be that the liturgy of the loom points us toward the wisdom of knowing salvation itself.  I’d like to believe that the Luddites thought likewise, and would love for someone to prove or at least suggest this in another book about them.

*Gene Sharp makes brilliant points about the benefits of non-violent struggle against states or state-sponsored entities in “From Dictatorship to Democracy,” available online.

**I.e, Tiberius Graachi, who committed himself almost entirely to non-violence.  But he did violate the Roman constitution and so became a law-breaker.  This may have cost his movement the fence-sitters they needed, and it also opened the door for the Senate to respond with force.

^The entirety of this paragraph owes everything to The Art of Seeing by Father Maximos Constans, pp. 108-109, as do the quotes below, found on p. 129