For our discussions this week, we looked at three different generals. . .

First we looked at Lee.  Though not a supporter of slavery or secession, he believed himself bound to defend his friends and his home of Virginia.  One might say that he did not fight for a ’cause,’ but for his friends.  Clearly he was a man of integrity and faith, an inspirational leader.  He also was able to size up opponents psychologically to a remarkable degree.  One sees in his eyes intelligence, melancholy, and a deep fire.

For the first 100 years or so after the war, scholarship on Lee remained entirely favorable to him.  For most, the South was doomed to defeat from the beginning.  Only Lee’s brilliant generalship staved off disaster, and in fact, even got them close to pulling off a “miracle” victory.

But recently many historians have taken a much different view of the South’s chances, and see the Civil War as one that they had every chance of winning.  This shift has led to a reevaluation of Lee himself.  If one believes that the South could have won by using a “bend, don’t break” approach, then we need to ask why Lee employed the strategy he did, and what its impact was.

Military historians have taken Lee to task for his offensives into MD and PA, both of which cost the South dearly.  Lee let himself be drawn into other broad ranging offensives actions, that even when successful (like Chancellorsville) came at great cost.   Some see more than just a tactical mistakes.  Some see Lee as a good general, but not a great one, a man bound by the honor dictates of the South’s culture.  Some see this sense of honor manifesting itself not only in his “need” to attack, but also in the vague deference he showed his subordinates.  Those who may be familiar with the Battle of Gettysburg know that for the first two days of the conflict, Lee did not have his top cavalry commander, Jeb Stuart, who spent time away from the army gathering supplies. But Lee bears some responsibility for this himself, as we can see if we look at the orders he gave Stuart as the army prepared to march into Pennslyvania.
Lee’s Orders to Stuart before Gettysburg

‘If you find that Hooker is moving northward, and that two brigades can guard the Blue Ridge and take care of your rear, you can move with the other three into MD and take position on Gen. Ewell’s right, place yourself in communication with him, guard his flank, keep him informed of enemy movements, and collect all supplies you can for the use of the army.’

General Longstreet took an opportunity to perhaps add some clarity to Lee’s intent of having his cavalry stick close by:

‘Lee speaks of your leaving Hopewell Gap and passing by the rear of the enemy.  If you can get through by that route, I think you will be less likely to indicate your plans than if you pass to our rear.  You had better not leave us therefore, unless you can take the proposed route in rear of the enemy.’

But the next day another set of orders arrived from Lee, which muddied the waters yet again. . .

‘You will be able to judge if you can pass around their army without hindrance, doing them all the damage you can.  In either case, after crossing the river [Lee presented two options to him of where to cross] you must move on and feel the right of Ewell’s corp’s collecting information and provisions.

Lee’s lack of clarity to Stuart about exactly what his job was may have been the reason for his absence at Gettysburg. But that’s not all.  Many lament that General Ewell did not seize the heights during the first day of the Battle of Gettysburg.  But Lee’s Orders to Ewell regarding the heights show the same ambiguity that he communicated to Stuart:

You are to take the heights, if practicable, but avoid any general engagement until the arrival of the others divisions of the army.

You may notice a certain deference in these orders.  Lee was a gentle man at heart.  But the ambiguity could be misinterpreted.  Was Stuart to get provisions,  or stay close to his flank? Longstreet,notice, speaks with more directness on what his priorities should be.  Should Ewell take the heights, or avoid a general engagement?  We enjoyed debating the merits of Lee’s offensives, with some students agreeing with recent critics of Lee, and others arguing that the South needed to try some kind of offensive to win, and they might as well have used Lee.

U.S. Grant had none of the dash or style of most important commanders, not even an impressive mustache like the Union’s 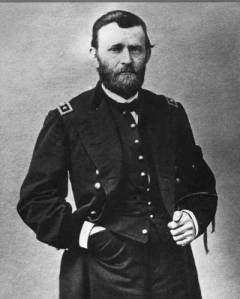 Joshua Chamberlain.  He seemed every inch the average man from Ohio.  Rumors said he drank too much. Strategically, he displayed little creativity.  Yet he had a tenacity and single-mindedness that most other Union generals lacked.  As Lincoln said of him, ‘I can’t spare this man.  He fights.’

Grant stands in stark contrast to the elegance and pedigree of Lee, and in that way mirrors Lincoln.  Nothing about his bearing or manner spoke of anything to do with flash.  His tactics reflected his straightforward, methodical nature.  But to my mind there must have been something maddening about fighting Grant.  Never brilliant, he had tremendous consistency.  He kept moving, and demanded that you (his opponent) never slack.  He had an large reservoir of patience, and tended to see not what he lost in battles, but in what he gained.  His men believed in him.  Lee, for all his gifts, could not beat him.

While Grant is best known for wearing Lee down at the end of the war, many consider his most impressive campaign to be his taking of Vicksburg in July 1863.  As the map indicates, he had to travel far and wide, but in the end, simply would not let go of his objective.  The capture of Vicksburg ensured Union control of the Mississippi and allowed them to choke the life out of the Confederacy.

3. At one point during the war William T. Sherman was out of the army, depressed, and even contemplated suicide.  Volatile and somewhat unpredictable, he got another command and began to earn the trust of Grant. After taking Atlanta in September of 1864, he had the idea of taking his army and marching it to Savannah, away from supplies and communication, targeting wealthy southern properties for destruction.  Many thought the idea foolhardy, but Sherman thought otherwise:

Many controversies surround Sherman’s ‘March to the Sea.’  Those in favor of him would probably argue the following:

If Lee’s picture shows his aristocratic roots, and if Grant’s belies a plain pugnacity, Sherman’s face shows us all of his brilliance, all of his craziness, and the fact that he just doesn’t care.  I wouldn’t want to face him.