As I mentioned at Orientation, the class this years is entitled, “American History” even though we will not spend the entirety of our time studying America particularly.  Still, 19th and 20th century America will receive special focus.  In light of this, I introduced a few key questions that will form the backdrop of our study this year:

Hopefully students will enjoy grappling with these difficult questions.

We looked at the transformation of American democracy under Andrew Jackson, and this ultimately led to 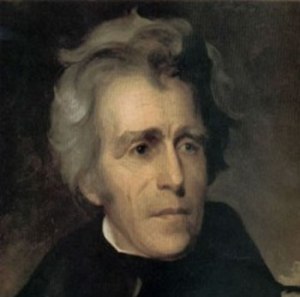 discussions on the following topics:

2. In some ways, Jackson was our first “American” president.  Washington, Jefferson, Monroe — all of them had an essentially European style upbringing and education.  Jackson grew up on the frontier without the formal training.  Previously, government was for the “best” men to rule on the people’s behalf.  Jackson believed that if he could be president, certainly anyone could be Secretary of State.  He began the so-called “Spoils System” by rewarding his political friends with government posts.  However distasteful this might be, it had its roots in a passionate belief in equality, that no one should be thought of as “elite.”  His inaugural celebration had a much more loose and informal feel than that of his predecessors. 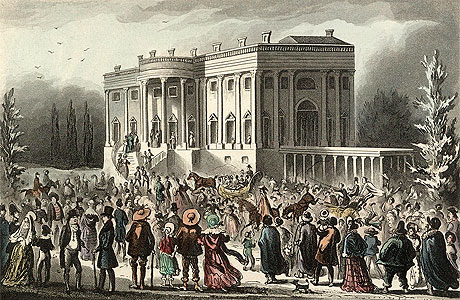 3. Just at the end of class Friday I introduced  political philosopher Isaiah Berlin’s formulation of ‘Negative’ and ‘Positive’ liberty.  Does liberty mean freedom from outside constraint, or are we not truly free unless directed toward a greater good, as the Puritans might have argued?  Do restaurants rob smokers of their liberty by banning them, or does that ban in fact enhance the freedom of non-smokers not to inhale second-hand smoke?  Non-smokers are certainly in the majority, but every democracy must protect minority rights to be considered a democracy at all.  How much, and what kind, of protection should minorities receive?  This becomes all the more problematic when extending rights to the minority means the minority inconveniences the majority.

The interesting and problematic part of this debate is that both sides believe they are enhancing liberty.  The restaurant that allows smoking everywhere believes that they are simply letting people do what they choose to do, even if the choice is a bad one.  What business is it of theirs what people do with their lives?  Who are they to make choices for others?  On the other side, some would say that such ‘liberty’ is in fact liberty only for the minority to do as they please.  The ‘liberty’ of some is ‘oppression’ for others forced to breathe in the smoke.  With everyone smoking in restaurants, the freedom of non-smokers to eat where they please has significant limits.

Many of our political debates, I feel, may have something to do with these different definitions of liberty.

Of course this discussion of liberty cannot divorced in our context from a discussion of slavery, and may help us understand why many came to defend slavery in the name of liberty.  To help us understand slavery in America we will look briefly at the history of slavery at some point next week.  Why did it disappear in the Middle Ages?  Why did it start to return in the Renaissance?  Was indentured servitude slavery?  Why did slavery linger in the South?  Why did we not ‘solve’ the slavery question with the Declaration of Independence or the Constitution?  Below I include the brief reading selections I gave the students on the issue of “Negative” and “Positive” liberty if you would like to read yourself.

Next week we will look at the expansion of America to the west and south in the 1840’s, and what impact this had on the political climate of the period.  I look forward to a wonderful year.

Negative and Positive Conceptions of Liberty

Philosophers such as Locke or Adam Smith or, in some moods, Mill, believed that social harmony and progress were compatible with reserving a large area for private life over which neither the State nor any other authority must be allowed to trespass. Hobbes, and those who agreed with him, especially conservative or reactionary thinkers, argued that if men were to be prevented from destroying one another and making social life a jungle or a wilderness, greater safeguards must be instituted to keep them in their places; he wished correspondingly to increase the area of centralised control and decrease that of the individual. But both sides agreed that some portion of human existence must remain independent of the sphere of social control. To invade that preserve, however small, would be despotism. The most eloquent of all defenders of freedom and privacy, Benjamin Constant, who had not forgotten the Jacobin dictatorship, declared that at the very least the liberty of religion, opinion, expression, property must be guaranteed against arbitrary invasion. Jefferson, Burke, Paine, Mill compiled different catalogues of individual liberties, but the argument for keeping authority at bay is always substantially the same. We must preserve a minimum area of personal freedom if we are not to ‘degrade or deny our nature’. We cannot remain absolutely free, and must give up some of our liberty to preserve the rest. But total self-surrender is self-defeating.

What then must the minimum be? That which a man cannot give up without offending against the essence of his human nature. What is this essence? What are the standards which it entails? This has been, and perhaps always will be, a matter of infinite debate. But whatever the principle in terms of which the area of non-interference is to be drawn, whether it is that of natural law or natural rights, or of utility, or the pronouncements of a categorical imperative, or the sanctity of the social contract, or any other concept with which men have sought to clarify and justify their ‘convictions, liberty in this sense means liberty from, absence of interference beyond the shifting, but always recognisable, frontier. ‘The only freedom which deserves the name, is that of pursuing our own good in our own way’, said the most celebrated of its champions.  If this is so, is compulsion ever justified? Mill had no doubt that it was. Since justice demands that all individuals be entitled to a minimum of freedom, all other individuals were of necessity to be restrained, if need be by force, from depriving anyone of it. Indeed, the whole function of law was the prevention I of just such collisions: the State was reduced to what Lassalle contemptuously described as the functions of a night-watchman or traffic policeman. What made the protection of individual liberty so sacred to Mill? In his famous essay he declares that, unless the individual is left to live as he wishes in ‘the part [of his conduct] which merely concerns himself’, civilisation cannot advance; the truth will not, for lack of a free market in ideas, come to light; there will be no scope for spontaneity, originality, genius, for mental energy, for moral courage. Society will be crushed by the weight of ‘collective mediocrity’.

Whatever is rich and diversified will be crushed by the weight of custom, by men’s constant tendency to conformity, which breeds only ‘withered’ capacities, ‘pinched and hidebound’, ‘cramped and dwarfed’ human beings. ‘Pagan self-assertion’ is as worthy as ‘Christian self-denial’. ‘All errors which [a man] is likely to commit against advice and warning, are far outweighed by the evil of allowing others to constrain him to what they deem his good.’  The defence of liberty consists in the ‘negative’ goal of warding off interference. To threaten a man with persecution unless he submits to a life in which he exercises no choices of his goals; to block before him every door but one, no matter how noble the prospect upon which it opens, or how benevolent the motives of those who arrange this, is to sin against the truth that he is a man, a being with a life of his own to live. This is liberty as it has been conceived by liberals in the modern world from the days of Erasmus (some would say of Occam) to our own. Every plea for civil liberties and individual rights, every protest against exploitation and humiliation, against the encroachment of public authority, or the mass hypnosis of custom or organised propaganda, springs from this individualistic, and much disputed, conception of man.

One way of making this clear is in terms of the independent momentum which the, initially perhaps quite harmless, metaphor of self-mastery acquired. ‘I am my own master’; ‘I am slave to no man’; but may I not (as Platonists or Hegelians tend to say) be a slave to nature? Or to my own ‘unbridled’ passions? Are these not so many species of the identical genus ‘slave’ – some political or legal, others moral or spiritual? Have not men had the experience of liberating themselves from spiritual slavery, or slavery to nature, and do they not in the course of it become aware, on the one hand, of a self which dominates, and, on the other, of something in them which is brought to heel? This dominant self is then variously identified with reason, with my ‘higher nature’, with the self which calculates and aims at what will satisfy it in the long run, with my ‘real’, or ‘ideal’, or with my self at its best.

Dominion and rationality necessarily presuppose freedom. Moreover,  freedom is a necessary condition of morality and love, love cannot be coerced. Man’s freedom and will is at the very heart of man made in God’s image. But as we will see man’s freedom is complex. Freedom has two stages, the first stage of freedom is an imperfect freedom which if used properly leads to perfect freedom. The first stage of freedom is the condition man is in at his creation, it is freedom to choose, I will have the pear and not the banana, I will not eat from the tree of the knowledge of good and evil, I will obey God, I will ignore God.  This kind of simple choice is not perfect and true freedom but only the means by which we achieve true freedom. Perfect freedom in the fullest sense is not about choice. This is the lie of the Devil, we believe that freedom means being free to do what one wants, free to choose for oneself. But true freedom is achieved when man simply becomes, when he comes to the place in his being that  he is free from the possibility of choosing the bad.  St. Augustine distinguishes between “the first freedom of the will, the ability not to sin” and “the final freedom… the inability to sin.”  St. Augustine writes in The City of God,

Nay rather, it will be more truly free, when set free from the delight of sinning to enjoy the steadfast delight of not sinning.  . . . This new freedom will be the more powerful just because it will not have the power to sin; and this, not by its unaided natural ability, but by the gift of God has received from him the inability to sin . . .   It surely cannot be said that God Himself has not freedom, because he is unable to sin?