I have republished this because of the partial similarities in theme with Hillaire Belloc’s Waterloo, reviewed here.

This is a great work, probably a labor of love to write and certainly at times to read. It bogs down in parts, at

times too technical and obscure. But if you let it wash over you and absorb the full effects, one sees the book’s great value. It’s theme of how war pressures a society, and how victory can be turned into a defeat of sorts, is entirely relevant for us today.

But don’t let this stop you. Look at me for example. I skipped big chunks of it and here I am, confidently reviewing it!

Toynbee believed that studying the classical world had importance not so much because of its influence on western civilization, however true that may be, but because we have with the Hellenic world a complete story fairly well documented. Given the uniformity of human nature, their story can be instructive for all us.

1. One key to understanding the Hellenic world is the city-state model. Time and again, this model proved its superiority over other political organizations in the Mediterranean and beyond. The Greeks beat Persia for example. Organized along these lines, the Romans were poised to better their less well organized neighbors.

2. Conflict is part of life, and Rome eventually and continually got into conflicts with provinces around them. Their inward structure and at least moderately progressive alliance structure gave them a final advantage in these various conflicts.

Toynbee does not exalt Rome as the paragons of ancient virtue. But neither does he dismiss the good parts of what made them great. It’s ok to discover good things about western civilization!

Their victories solved some problems but created others. By the mid 4th century B.C. Rome’s expansion had done two things

Now such cohesion would be impossible. They were too big. Rome had a choice to make. They could either a) Transition into a more bureaucratic state with more central authority, b) Expand the base of their rights and go to a broad-based representative democracy, or c) Forget social cohesion and extend the power of their ruling class to these other areas as well.

Given their aversion to monarchy, ‘a’ was not likely, but ‘b’ was possible. Alas, they chose ‘c.’

Toynbee elsewhere makes the somewhat dubious assertion that the Hellenic world (which included Rome in his view) began to collapse in 431 BC with the Peloponnesian War. As it applies to Greece, it works, but not Rome. His argument here though, that Rome began to lose itself somewhere around 350 BC makes more sense. This is when Rome makes the transition from some kind of admirable democracy to a less admirable oligarchy.

3. It is the nature of oligarchies (like most regimes) to maintain control. Rome was still progressive in some ways, but in moral/political matters going half-way is worse than nothing. For example, most would rather not be invited to a party at all, instead of being invited and then told, “You can’t eat that. These rooms are off limits, etc.” They could be benevolent at times, but insisted on control. This dynamic often led to a unity of prominent families over and against the masses. They condescended to give allies some rights, but never equality.  This made them vulnerable.  Pride often does.

4. This was the climate that Hannibal hoped to exploit when he invaded. The traditional narrative is that Rome, 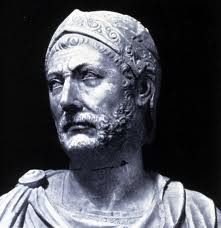 pressed to the brink by a military genius, rallied itself and  gained the victory. They add lots of territory in Africa and Spain. It’s a triumph for western civilization.  Rome’s victory over Hannibal saved them from coming under the thumb of an an elitist merchant class oligarchy that would never have let them exercise their political wings.  That was the best case scenario, with the worst case being utter destruction.  Hurray — western civilization is saved!

Not so fast, says Toynbee.  He dedicates the vast majority of vol. 2 to showing the unintended negative ripple effects of Rome’s victory. Some of them were inevitable, but most Rome had a direct or indirect hand in.  They could have avoided their fate.

The main theme of the post-war years is the oligarchy attempting to maintain their hold on power, but shooting themselves in the foot with most every attempt. For example,

In the end Rome’s response to their victory led to the destruction of the oligarchy, first in their alienation of the peasantry, then in their fratricidal civil wars, and finally, in their death at the hands of the Principate with Augustus.

What lessons can be learned?

Rome made many mistakes, but many of these were not unusual mistakes. When people win the lottery they take the money and don’t consider the consequences. Most civilizations would take the territory gained in war in the same way.

The fact that Rome ‘lashed out’ and became more controlling and paranoid is also not unusual given the horrific shock and destruction Hannibal inflicted. In their minds it must have been ‘prudence.’ ‘Fool me once,’ and all that.

But Rome was not doomed to follow this path. Though Toynbee does not mention this specifically, I believe that his thesis fits with his overall belief that civilization routinely destroy themselves through acts of pride, fear, and envy. Only sacrificial love can allow a civilization to maintain itself long-term. This is not mere sentimentality. In fact, he takes 800 pages with gobs of footnotes from obscure German historians who wrote books with very long titles to prove his point. If we cast our bread upon the waters, we’ll get it back eventually.

We cannot compare the shock of 9/11 to what Rome endured in the 2nd Punic War. The two events are not even close in magnitude, so the fact that our reaction has not been as extreme as Rome’s is nothing to write home about. We should be thankful.

However, in some areas, such as the extension of our military, the possible ‘tightening’ of our society, the easy way which our civilization can give way to fear, should be a warning to us. Through acts we could and perhaps could not help, we find ourselves stretched economically and more divided culturally than before. We would be silly to suppose that are automatically immune from Rome’s fate.

To close the review (too long!) in the true style of Toynbee’s book (also too long!), I need to include a large appendix. So, below is ‘Exhibit A’ for the change of Rome’s character: the expansion of slavery beginning with the first Punic War (264 B.C.) and ending with the destruction of Carthage in 146 B.C.

Expansion of Roman Slavery During Punic Wars (not a complete list): 264-146 B.C.