This week we began looking at Macedonian civilization, and as usual we began with geography.

The map shows Macedon as a land-locked and mountainous area, and we would expect this kind of terrain to have a particular emphasis on its people. . .

I was glad to see the students start to make connections between Macedon, Assyria, and Sparta.  All three share a similar geography, and all three share a similar geographic position — on the periphery of their respective societies.  Sparta and Assyria had stronger central governments than Macedon, but their similarities should make us realize of the power of geography to shape the course of a civilization.

As I mentioned, Macedon had little role in Greek civilization for many centuries.  But as luck would have it, Macedon saw the rise of the charismatic and ruthless Phillip II just at the very moment of

grave political weakness for Athens, Thebes, and Sparta.  Opportunity knocked for Macedon.   Phillip looked every inch the tough customer he portrayed, wearing an eye patch over his wounded eye for necessity, and probably, for effect as well.  But Phillip combined his personality and appearance with a keen understanding of how to maximize the qualities of his society into a formidable military machine.

One key to the effectiveness of his military was that he matched the personality of his culture with his army.  Infantrymen in other Greek city-states often came from the middle-upper classes.  He owned land and had a stake in the politics and way of life of his city-state.  The Athenian hoplite, for example, therefore oriented himself toward defense of what he had.  He wore heavy armor and carried a large shield.  This was not a mobile force, but one geared to “make a stand” to defend home turf.  A standard Greek military formation might look like this: 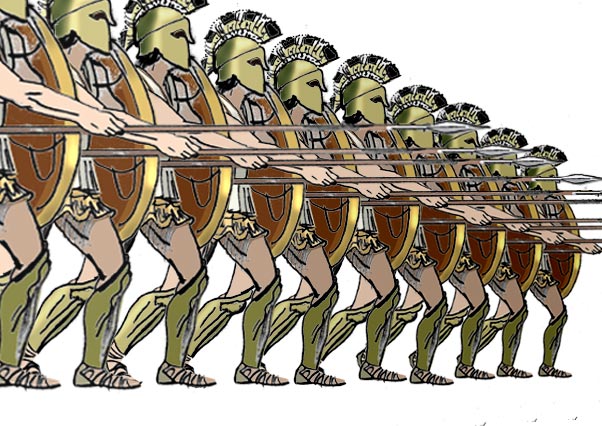 In contrast to other city-states, Macedon had virtually no middle class.  Anyone recruited for the infantry would be either poor or a mercenary.  This type of man would not fight to defend anything in particular.  He has no stake in the society for which he fights.  Such a man might be motivated to take from others, however, and this would require shifting the balance toward an offensively minded and equipped infantry, which you see below: 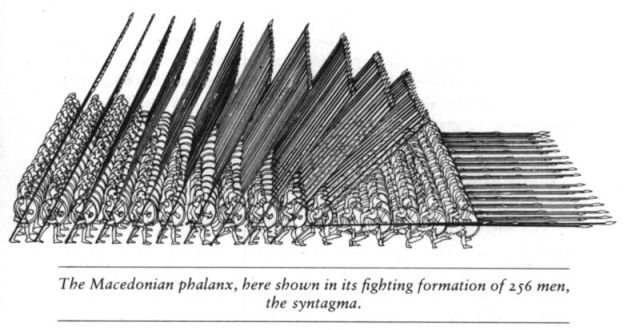 In addition to the long spears you see above, their soldiers also carried a long dagger, another offensive weapon.   While the image above does show the Macedonians with shields, I agree with Victor Davis Hanson (and others) that argue that Macedonian shields had no real function in battle.  They were worn apparently mostly around the neck and draped to the side (as both arms would be needed to wield their spears).  Some argue that the shields were used in battle, but mainly as a prop for their spears.  If this is so, we see that even their shield served as a offensive weapon of sorts.

Phillip’s infantry gave them much more firepower at the point of attack.  Not only did they have longer spears, but because they had to stand sideways to hold the spears, they could fit more men in each row.  Some students wisely pointed out that the Macedonians would be vulnerable to a quick flanking movement, but the Greek infantry Phillip faced was “heavier” infantry, and not equipped for fast movement.  They could not exploit this weakness of Phillip’s force (though a century later, the Romans would do so).

I hope that the students understood that militaries don’t, or at least should not, be created in a vacuum. They function best when they are a direct product of the civilization from which they arise.  Next week we will continue by looking at the most famous Macedonian of all, Phillip’s son Alexander.