It did not take me long to get miffed by Steven Greenblatt’s The Swerve.  Almost right away  he

commits two cardinal sins in my book when discussing the Medieval period.

But Greenblat’s charm and narrative style kept me going.  In the end, I didn’t read the whole thing and skimmed some sections, but one thing in particular struck me forcefully — how handwriting can be a reflection of the personality of a society.

‘Gothic’ script dominated the ‘Gothic’ era, and it can be contrasted with the Carolingian script revived by many Renaissance scribes:

Petrarch complained that Gothic script, “had been designed for something other than reading,” and he was not whining, but speaking the truth.

The height and cramped fashion of letters makes it difficult to read, and may subconsciously have been designed to be “seen and not heard.”  When we remember that very few could read, and that books were meant to educate visually just as much as textually, the Gothic “font” makes more sense.

Here are examples of the Carolingian script fashionable during the Renaissance:

Perhaps pro-Renaissance scholars do not exaggerate the real shift that took place as far as education is concerned.  Perhaps this shift in handwriting style helped pave the way for the printing press itself.

If the “font’s” a society uses reflect something of its larger worldview, we would expect to see this expressed in other aspects of their culture.  Gothic architecture mirrors gothic script in uncanny script in uncanny ways, with the “bunched up” nature of its space.

True, the high ceilings of these cathedrals did give a sense of space, but it was space that meant to overpower you, a weight and bulk of a different kind.  The stained glass windows again reveal the same thing as the buttresses — the “cramming” full of space with color.

In the Renaissance we see something else entirely, a more “human” scale in architecture, and a greater sense of space.

So apparently, handwriting can be an expression of a culture’s personality just as architecture can, which should not have surprised me.

When I realized that the Renaissance basically just revived Carolingian script, this gave new significance to the Carolingian Renaissance itself under Charlemagne six centuries earlier.  Those that invented the style and not merely copied it should get greater credit.  Some scholars dismiss the “Carolingian Renaissance,” as small potatoes, but the script they used showed an interest in reading, which sheds new light on the work of Nottker and Einhard.  So, what about architecture under Charlemagne — will it show that same sense of space?  Naturally we must consider Aachen Cathedral, the central building of Charlemagne’s realm: 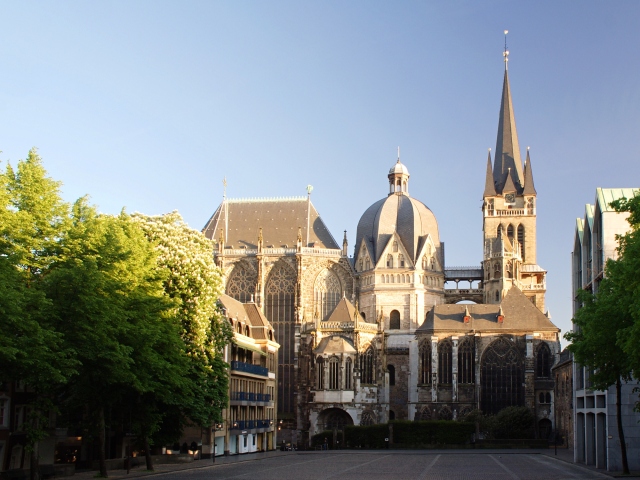 Well, it appears that we have a mixed verdict.  It is part Gothic, part Byzantine, and part something all its own.  Will I allow this to overthrow my theory of seeing links between handwriting and architecture? Perish the thought!  I can always say that Charlemagne’s time had so much going on that they had no time to be particularly self-aware of these choices, in contrast to both the Gothic and Renaissance periods.

Does America’s utter lack of defining architectural identity have anything to do with our confusion about teaching handwriting?