The Enlightenment historian Edward Gibbon pointed out with some ridicule that in the Arian controversy, Christianity got into a kerfuffle over the smallest letter in the Greek alphabet — the iota.  At the Council of Nicea Arians wanted the word “homoiousios,” meaning “similar substance” inserted into the creed concerning the nature of Christ.  They were comfortable thinking of Jesus in divine terms, but not as an equal to the Father in His essence.  Led by Athanasius, the orthodox contingent objected, insisting on the word “homoousious,” meaning “same substance.”

For Gibbon and other Enlightenment oriented thinkers, this all seemed too much.  Such minutiae, such trifling, would upset things so unnecessarily.  Given that Gibbon liked nothing better than a well-oiled worldly machine, he saw the controversy as so many wrenches in the works.  Of course Gibbon missed the point entirely.  The difference between viewing Christ as fully God as opposed to merely “God-like” changes one’s conception of the entire universe, creation, and history itself.  When it comes to our theological understanding, what we worship will have dramatic consequences.

I’ve always believed that understanding religious belief formed the key to understanding any event in history, be it great or small.  Often this is more easily seen in the ancient world, where religion showed on the sleeves much more so than today. But men are men, and as a man thinks, so he is (Prov. 23:7).   Mark Noll  points out the religious roots and the religious mistakes of both North and South in his 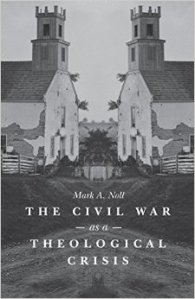 excellent The Civil War as a Theological Crisis.  Noll’s analysis gets to the heart of the real differences between North and South, and shows how these religious differences formed the roots of the political disagreements that led to war.  Both sides professed belief in the authority of the Bible, and both sides reached different conclusions.  That’s obvious to anyone, but Noll’s approach shows these different interpretations came from the same source American/Enlightenment source, and that makes this brief work a real treasure.

By 1850 America experienced a deep political crisis, but astute observers of the day saw that the roots went deeper. A Protestant ethos merged nicely with Democratic principles in America quite easily.  The individual should be able to read, reason, and think for himself.  Both Protestantism and Democratic government rest on the idea that truth always has a “plain” and obvious character.  It could be argued that an agreed upon “atmosphere” of sorts existed between Protestant denominations despite their differences (Noll takes this for granted and does not argue the point).  But in 1844 both Methodist and Baptist churches (the largest in the U.S. at that time) experienced deep schisms.  A broken Church will lead to a broken nation, and leaders from the North and South predicted this. Henry Clay opined that, “this sundering of religious ties . . . I consider the greatest source of danger to our country. In 1850 John Calhoun of South Carolina warned that if the great Protestant denominations finally broke, “nothing would be left to hold the States together except force.”*  Noll writes,

If we keep in mind that it was never only a matter of interpreting individual biblical texts, but always a question of putting actively to use the authoritative Book on which the national culture of the United States had been built, then we are in a position to understand why in 1860 battles over the Bible were so important, why divergent views of providence cut so deeply, and . . . why the Civil War illuminated much about the general character of religion in America.

Southern arguments in defense of slavery had the advantage of simplicity and (the apparent) strict fidelity to the Biblical text.  They pointed out that . . .

Thus, to argue (as abolitionists often did) that anyone who practiced slavery could have nothing to do with Biblical Christianity flies in the face of the entire and obvious biblical teaching on slavery.  The case was open and shut.

The most common arguments usually had the following characteristics:

In other words, anti-slavery arguments inevitably used first principles but tended to avoid textual rigor and so failed to deal head-on with what pro-slavery advocates said.  Furthermore, many anti-slavery arguments wedded themselves to “natural reason,” “self-evident truths,” and “republican practices” and at times relied on these ideas more than Scripture itself.  Thus, as Noll comments, “The primary reason the biblical defense of slavery remained so strong was that biblical attacks on slavery were so weak.”

Much better arguments against American slavery existed from some Protestants, and interestingly, some Catholics as well. Such arguments pointed out that . . .

So whatever one might say about slavery in a general vacuum, no good arguments existed for slavery as practiced by the ante-bellum South.

Unfortunately such arguments never made it into the mainstream of American cultural life.  As to why, we might assume something along the lines of a “short attention span,” but this fits modern times more readily.  In fact, audiences flocked to hear discourses and debates of all kinds in the mid 19th century. Lincoln and Douglas in 1858 spoke for many hours at a time to packed audiences.  One debate on slavery lasted for multiple hours over multiple days to an audience of several hundred.  Rather, the reason lies in the common roots shared by mainstream arguments about slavery on both sides.

The mainstream arguments for and against slavery before the Civil War had the following characteristics:

Whichever side won the argument (i.e., the war), the future for having the Church influence culture looked bleak.  The Enlightenment had done its dirty work.

Subconsciously perhaps, we reject oversimplifications because reality and our experience have more complexity and mystery than the Enlightenment can fathom.  Rejecting this truth condemned us to search aimlessly for generations hence to fill the void with politics, “The American Dream,” sex, and the like.**  Obviously western theologians could and did make nuanced and complex arguments, but western culture as a whole failed to notice or heed them.

As a buttress to his observations about slavery arguments, Noll includes a section on the idea of God’s providence as debated before and after the war.  True to form, both sides found obvious answers to the results of the conflict.  For the Southerners, even their defeat showed the rightness of their cause, for “God disciplines those He loves” — i.e. — “We are experiencing discipline, showing God’s love for us, showing the rightness of our cause.  For it is often true that the godly rarely prosper in this world.”  For the North, their arguments had a simpler character, though no doubt the South would have made them had they won the war.  “We won.  God was and is on our side.   Therefore we were/are right.”  Lincoln understood better, and pushed back on this simple approach.  We may always know that God has events in His hand, he agreed, but the particular application of His providence often remains a mystery to us.  Not even someone of Lincoln’s stature could get others to embrace this more nuanced view.

Noll’s work has great value for his illumination of the state of religion in 19th century America.  What makes it even more intriguing is how he reveals what may be the central problem of American political and educational life.  Our problem really resides not in short attention spans, not in one political party or the other, not the sexual revolution, or other such movement. Rather, Americans need to grapple with how our democratic ideology meshes with the nature of truth itself.

*Noll includes some interesting statistics showing the decline of religion and growth of government.  This should not surprise us, as Calhoun (not someone I’d like to agree with very often) foretold.

**In an interesting digression, Noll points out that warfare and dramatic social change have often produced great works of lasting theological depth.  One thinks immediately of Augustine’s The City of God, but numerous other examples exist (St. Bernard during the Crusades, and St. Francis experienced a dramatic shift after fighting in a small war.  In the modern era, Bonhoeffer comes most clearly to mind).  By that model, the Civil War should have, but failed, to produce any significant theological insight, and this reveals a thin theology throughout North and South at that time.

Perhaps not surprisingly, the great storytellers of the 20th century, MacDonald, Lewis, Tolkien, Flannery O’Connor, Walker Percy — all came from liturgical and historical traditions.  Lewis and Tolkien both fought in W.W. I, and O’Connor and Percy both suffered from lifelong illnesses.