This week we brought some of the  events leading up to the Civil War to a close, and examined a few different issues.  Studying the Civil War usually brings strong political passions to the fore, and this class has been no exception.  I wanted to try and cut to core of what divided the country, and reduce the argument to its essentials.

The past formed a key battleground between the North and South.  Both sides claimed sonship from what it meant to be an “American,” and both had different ideas on the meaning of liberty.

The North countered with

Classical theorists on government like Aristotle drew rationale for the state based on the family, so an analogy of the family might help us.  We can imagine the parents as the originators of the family and those most interested in preserving family unity and harmony between siblings (i.e., the federal government).  We can put states in the role of grown children.  Some children seem to be leading wayward lives.  But what control should parents still have?  They might urge a child to stop doing ‘x’ behavior, but what if the child did not listen?  What power should the parents have?  Should they have access to a means of force to compel their 30 year old children to come to a family reunion or face punishment?  What kind of punishments can a parent of a 30 year-old mete out anyway?

Obviously the analogy breaks down at points.  But for the federal government to assert that slave-owning states must not own slaves sounded to southern states, “You do not have the ability to govern yourselves.  You are not equal to us, who have that ability.  You are lesser, and therefore we can dictate to you.”

Those against slavery might have used a different analogy.  Perhaps here the children are teens, not independent adults.  Independent adults are akin to separate nations with their own families, but the U.S. is still a family of 50 states.  Parents grant their teens a certain measure of independence.  But parents would grant their teen so much freedom that the integrity of the family unit gets jeopardized.

In the excerpts from Democracy in America that we discussed this week, De Tocqueville talked about how the ideals of liberty and equality ultimately compete against each other.  We cannot have equal amounts of liberty and equality, so we must choose where the balance lies.  Different people would give different priorities to either liberty or equality.

Scholars have debated for years the cause of the war.  Some say that war was about slavery, others say that slavery had nothing to do with it, and instead the war centered on the rights of the states.  I prefer to split the horns of the dilemma.  In 1861 the issue boiled down to Union v. Secession, but slavery formed the vast majority of the subtext related to this question.  It lurked underneath most every significant political debate from at least 1846 on, and in some ways, dominated discussions decades before that.  Economic issues did play a part, but they too had a lot to do with slavery.  The map below shows the concentration of slaves in the various states.  The darker the color, the higher the concentration.

We see how slavery concentrated near water, or in low lying tidewater areas (i.e. Southeastern VA and MD).  This in turn led to the predominance of labor intensive cash crops like cotton or tobacco.  Below is a map of how various southern counties voted on the secession question.  Obviously, not all wanted secession.  The South was not monolithic.  But there is a striking link between the counties who voted for secession and the presence of slavery.  Clearly, the moral question of slavery and the political issue of slavery went hand-in-hand in 1860-61. 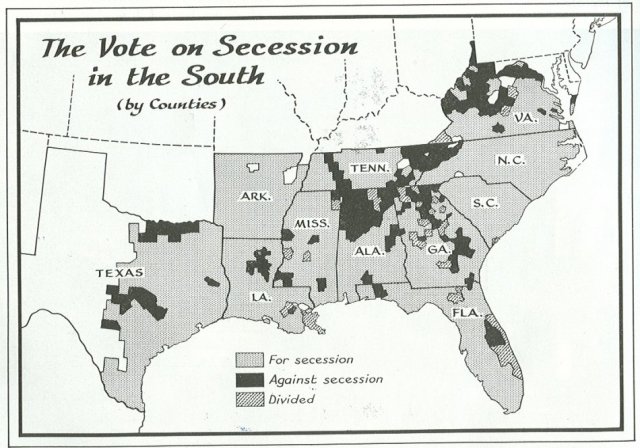 Slavery was an issue in the Declaration of Independence, Constitution, in 1820, 1848, 1850, 1854, 1856, it was the main topic of discussion in the Lincoln/Douglas debates of 1858 — why did the various compromises on the issue fail?  In fact, could they be said to have made things worse? As time went by and slavery became more prevalent, their attitude went from ‘necessary evil’ to ‘positive good.’  What can explain this shift?

I think we can say the following:

This hardening of their views on slavery covered over many contradictions.  Masters supposedly civilized their slaves, but they constantly feared slave insurrections.  Masters claimed to “enlighten” their slaves but often actually educating them was forbidden by law.

As I mentioned earlier a “North=Good, South=Bad” paradigm will not help us understand the period or the war itself.  Many northerners differed little in their view of blacks from the South.  Had the North treated blacks better, some of the evils of slavery might have been exposed sooner.  Of course, there were those in the south who respected blacks and treated them with dignity.  But it is still true to say that the North had an anti-slavery bent even if many had ambiguous feelings about abolishing it.  And it is still true to say that many in the South wanted not only to preserve, but extend an institution that broke up families and and allowed masters to use other humans as they saw fit.

These differences over slavery also had links to broader cultural differences rooted in the typical differences between urban and rural societies.  Generally speaking. . .

These different values form different priorities, and this may also help explain the conflict.