This week we looked at how Napoleon rose from literal obscurity to seize power and capture the imagination not just of France, but of all Europe as well.  How and why did this happen?

Human nature can tolerate chaos and disorder for only so long.  The French Revolution went through governments and constitutions at a rapid pace, never able to ultimately agree on exactly what they wanted to achieve.  Just as the civil wars and political violence of the late republic in Rome (ca. 100-30 B.C.) gave rise to Emperor Augustus, so too the French Revolution opened the door for someone like Napoleon.  We reflect God’s image in our need for have some kind of stability to make living truly possible, so it is natural that the French (and the Romans) would pay a high price to achieve that stability.  In the case of France, the price they paid involved giving up many of the democratic ideas espoused by many revolutionaries.  Was the price too high?  We will discuss this in the days to come.

Napoleon’s keen political opportunism, combined with a poetic military mind, gave him an excellent chance to have a shot at power in France.  The Revolution stripped the traditional ruling hierarchy in France from the 18th century bare to the bone.  Forget birth, forget status — anyone who could ride the tiger of French political forces could hypothetically seize power and keep it.  Napoleon had these circumstances in his favor, but Napoleon’s genius allowed him to coordinate the energy of the revolution and the culture created by the revolution and channel it into the military.

Like America, the French were inspired by a creed of universal values.  They had a “Declaration of the Rights of Man,” for example., just as our Declaration of Independence declared that, “All men are created equal.”  If much of the energy created by Romanticism caused destruction in France, Napoleon thought that showed the energy only needed properly harnessed.  Napoleon used this political culture to create a army that could go farther and faster than any other in Europe.  While other European armies still operated under the Enlightenment influence (emphasizing balance, order, proportion), Napoleon’s fashioned his army using the Romantic ideals of energy, spontaneity, and movement.

Napoleon had the insight to see that the values and culture of the French Revolution created a new kind of army for France.  The Enlightenment valued order, balance, and symmetry.  Enlightenment societies naturally created armies that focused on the same things.  Romanticism valued energy, instinct, “the deed,” and Napoleon’s personality and style fit right in with that mentality.  The French Revolution created a new society with new values, that would naturally lead to a new kind of army.  Not only that, the revolutionary events dispensed with large portions of the aristocratic officer corp that made up the Enlightenment oriented army of France’s past.

Military success involves many factors, and Napoleon knew how to put them together.  He often battled against superior numbers, but he knew that Enlightenment armies fear loss of equilibrium and balance above all things.  Furthermore, he knew that his army thrived on aggressive action.  He massed his troops at certain points on the field and made bold attacks totally out of character and practice for Enlightenment oriented forces.  Once he broke through at any particular point, the enemy would collapse, not just physically, but psychologically.  No one likes to face their worst nightmare.  Think of the opening lines of Beethoven’s 5th symphony smashing into a well ordered Haydn quartet and you can get the idea of the devastating effect French armies had under Napoleon.

Certain aspects of Napoleon are hard to like, but his story is certainly remarkable on its face.  Here we have a man from Corsica, a place no one cares about, rise up from utter obscurity to best all the big-wigs at their own game.  Even today, he can inspire excitement, as this 1796 painting shows:

But that youthful energy and charm diminished over time.  While the painting of him on horseback crossing the St. Bernard Pass still captures something of his dynamism, something is different.

What can account for the difference in how these two works strike us?

To my mind, Napoleon seems more remote, less human, in the second picture.  The event seems staged, which makes sense when we know that Jacques Louis-David, that arch-propagandist, painted it.  Napoleon did cross the alps to fight the Battle of Marengo, but he did it on a donkey, and certainly not in those clothes.  The expression on his face is a mask, and thus not particularly inspiring (at least to me). Napoleon drifted into becoming more of an image and less a real person.

From the above portrait, we need just a few steps and a few years until he crowned himself emperor.  His transformation from man to image seems complete.

But reality can be cheated for only so long, so there remained one final stage to complete the saga. . . 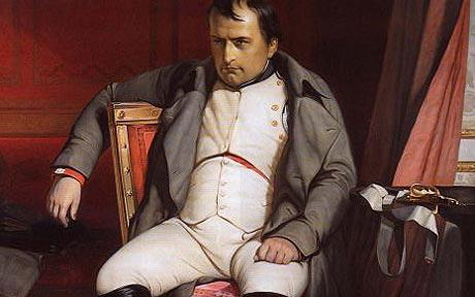 Next week we will see more of how this devolution of his person and power happened.