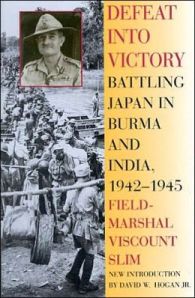 Slim’s writing bears some marks of what usually gives me trouble with books like this.  What distinguishes this book is his sense of style and humor.  He shares many anecdotes that paint himself a bit poorly.  He shares honest introspection about his actions without getting too much inside his own head.  When he asserts opinions of people he likes or dislikes he admits that others have different opinions.  Finally, he seemed interested in the campaign as a whole, more so than his role in it.

One of his slightly controversial opinions involved Orde Wingate.  Wingate was just the sort of commander that would appeal to Churchill.  Like Churchill he loved the knight-errant approach to war, and so the Chindits, or special forces, of the Burma campaign, gave Wingate a chance to sally forth boldly behind enemy lines.  The direct military effectiveness of his operations seemed limited, though even Slim admits that he boosted morale through the exploits of his men in the aftermath of a complete defeat inflicted by Japan.

Slim’s concluding comments interested me most about this aspect of the Burma campaign.  He thought that England’s reliance on special forces, and the mythology surrounding special forces, did not serve an overall good purpose.  He mentions the variety of special forces the British used (i.e. mountain divisions, amphibious divisions, long-range penetration divisions, and so on).  He acknowledged that some showed great examples of courage but writes,

Yet I came firmly to the conclusion that such [special forces] . . . were wasteful.  They did not give, militarily, a worth-while return the resources in men, material, and time they absorbed.

To begin with, they were usually formed by attracting the best men from the normal units by better conditions, promises of excitement, and not a little propaganda.   . . . The result of these methods was to undoubtedly to lower the quality of the rest of the army, not only by drawing off the cream from it, but by encouraging the idea that certain of the normal operations of war were so difficult that only specially equipped elite corp could undertake them.  Anything, whatever short-cuts to victory it may promise, which thus weakens the army spirit is dangerous.

. . . The level of initiative, training, and weapon skill required in a commando is admirable; what is not admirable is that it should be confined to a few small units.  Any well-trained infantry battalion should be able to do what any commando can do . . .   This cult of special forces is as sensible as to form a Royal Corp of Tree Climbers and say that no soldier who does not wear its green hat with a bunch of oak leaves stuck in it should be allowed to climb a tree.

Slim retracts a wee bit of this statement when he acknowledges that certain special units devoted to intelligence and sabotage, which fall outside the duties of standard training for  a soldier, but reiterates his main point when he stresses that the multiplication of special forces in Burma made unified command difficult to attain.

Our current war on terrorism presents many political and military challenges.  We have responded in part by significantly increasing the prominence of our special forces, both in budgets, deployments, and perhaps also in a surrounding “mythos” about them.  Like Slim, I am grateful for their courage and dedication.  Perhaps unlike him, I am not willing to apply his thoughts wholesale to our current situation just yet.  We face different sorts of military challenges now as opposed to W.W. II.  But we should not assume that we can do whatever we like militarily without it  having consequences on our values and political practices.   We should at least ask whether or not the increase of special forces may distance the military from the general public, or whether or not the military will be for “the common man” in the near future.

Special Forces demand, among other things, a great deal more secrecy, something else Slim abhorred.  Along with drones, they can be used with less public notice and oversight.  Democracies do not thrive with a populace disconnected from its government.  Is there a parallel between the increase of special forces use and the recent NSA scandals?  In other words, a military disconnected from a general democratic population may work (even unconsciously) to undermine the political application of democratic values.

Other wars have brought about shifts in our country’s values, sometimes for the better.  Maybe this current war will lead us into a better place as well.  Whatever the case, we cannot escape some kind of social and political change if we continue to fight in almost exclusively in a clandestine manner, and these changes will likely alter how we practice democracy at home.